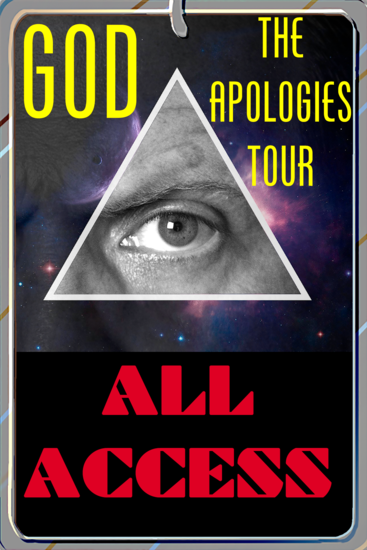 We are The Creator. We made the heavens and the earth. We gave you free will. That was clearly a mistake. We have returned to apologize, but not as you expect.

In the past, only the lucky few have spoken to Us directly. Prophets. Chosen ones. The occasional virgin. Now it’s your turn.

You will #EncounterTheDivine as you nteract directly with The Creator and Its Reflections throughout the theater in this Divine Immersive Encounter.

“God: The Apologies Tour” is created by Erik Blair and produced by They Played Productions, the team behind last year’s Fringe hit “Nothing Bad: A Werewolf Rock Musical”.

NOTE: Because this is an immersive production, we want audiences to have some advisories to better understand what they are likely to experience: