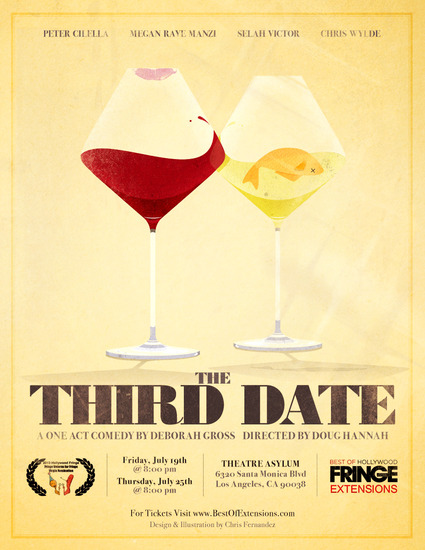 WINNER OF BEST OF THE HOLLYWOOD FEST
FRINGE VIRGIN NOMINEE

Evan and Allie have made it to their 3rd date. A momentous occasion fraught with great expectations. Prepare for none of them to be met as their imagination takes over revealing each other’s ex…and they have a lot to say.

What people are saying about “The Third Date”:

“This show was brilliantly written by Deborah Gross and perfectly directed by Doug Hannah. The concept could not have been better, and I laughed until I almost cried at the incredible story unfolding on the stage.” Bob Leggett, Examiner.com

“The Third Date is light-hearted and very funny, the theater equivalent of a well-crafted pop song.” Monica Miklas, Best of Fringe Producer