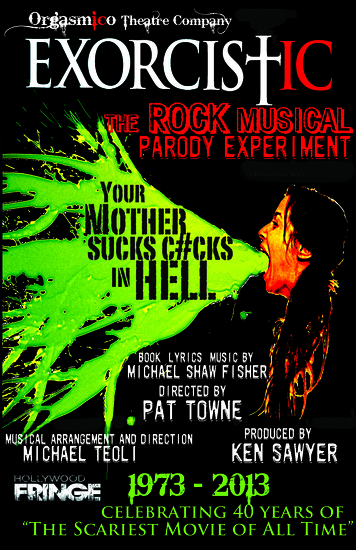 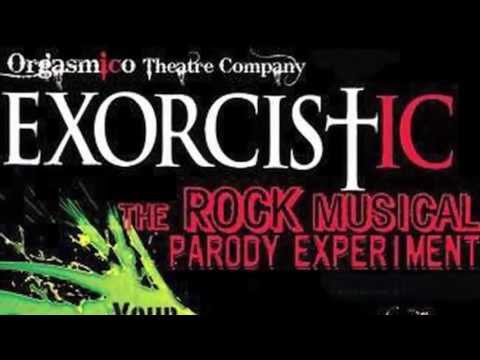 “Always delivered with delicious gusto…As with the classic rock-style score and entertaining lyrics, there isn’t a false note among the cast, but Laura Sperrazza is particularly, gruesomely brilliant as demonic little Megan.”
-LA WEEKLY

“Although I have never seen the movie The Exorcist, I had no trouble following the story and the way the company approached it. It came across perfectly. It was the perfect parody of a movie that changed Hollywood, and a fitting tribute to the 40th anniversary of the film coming up on June 19. Don’t miss this show”
-Bob Leggett EXAMINER

When a cash-strapped theatre company decides to capitalize on the 40th Anniversary of the theatrical release of “the Exorcist” with a parody rock opera, they unleash Hell.

Hot on the heels of last years award-winning “Doomsday Cabaret,” the Orgasmico Theatre Company returns to the Fringe with the premiere of their rock parody of “The Exorcist” known by many to be “The Scariest Film of All Time”

For a film that came out 40 years ago (On June 19th, 1973 was its NYC premiere according to IMDB) it’s influence on cinema is unquestionable: EMILY ROSE, LAST EXORCISM, THE RITE…the list of ripoffs goes on and on. Also there are the iconic images: the levitation, spiderwalking, the girl stabbing herself with a crucifix…and of course, the split pea soup. “Let Jesus F%#@! You!” All these classic quotables of cinematic history make it into this parody with music is that is PURE ROCK (in the 70s style of Ozzy, Bowie, Iggy, Santana, the Carpenters, Creedence and Partridge Family) and depicts the often absurd dichotomy of Good vs Evil, electric guitars summoning the demons who root in man’s dark corners and sneer in the face of God…

But that’s all hooey, right? No one really believes that demons exist anymore, do they?

Among the chief doubters is the Orgasmico Theatre Company, who’s players (in this play-within-a-play) refuse to believe that “evil” really exist in the modern world. Instead, they dissect its cultural relevance, its controversial themes, the 1970s mentality/morality and put it all into a big blasphemous intellectual “experiment” that allows them to break the fourth wall and engage the audience.

…But at what cost? The dangerous thing about live theatre is that if evil really does exist, THEN NO ONE IS SAFE.

This is the must-see rock musical experience of 2013. We even have a performance on June 19th – 40 years from the release of the Exorcist! So for all you fanatics out there, pick up a glow in the dark crucifix and say your prayers: your Salvation may depend on it!