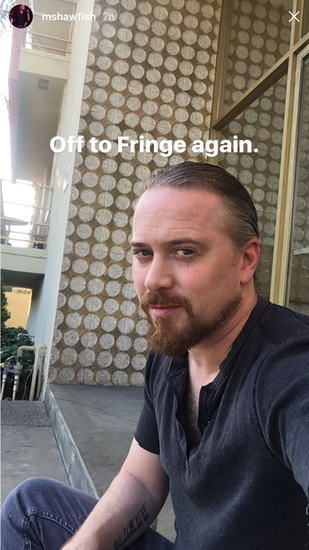 Michael Shaw Fisher is an actor, producer and writer of musicals, films, and novels in Los Angeles. His original musical DOCTOR NYMPHO VS THE SEX ZOMBIES won Best Musical at the Hollywood Fringe in 2018. His show SKULLDUGGERY: THE MUSICAL PREQUEL TO HAMLET premiered at Sacred Fools Theatre Company in 2016 and earned him an Ovation Award for Best Lyrics and Music. His solo show, SHAKESPEARE’S LAST NIGHT OUT won an Ovation Award for “Best Book of an Original Musical” after winning “Top of Fringe” at the Hollywood Fringe 2015 and "Best Solo Show.” As Artistic Director of Orgasmico Theatre Company, Michael penned and performed in the Ovation-nominated DOOMSDAY CABARET (2012), Best Fringe Musical-winning EXORCISTIC: THE ROCK MUSICAL PARODY EXPERIMENT (2013) and THE WEREWOLVES OF HOLLYWOOD BLVD. (2014). As an actor he has appeared in the Ovation nominated and Top of Fringe-winning SHAKESLESQUE with Cherry Poppins. He’s also appeared in Ben Moroski’s TILT also appeared in Theatricum Botanicum’s RICHARD III and ROSE COTTAGES in 2011.

Michael has performed a variety of other plays as well as written, produced and directed others. He has a passion for storytelling in all forms and can’t wait to bring more exciting and original theatre projects to life in Hollywood. He is in love with his wife and son.