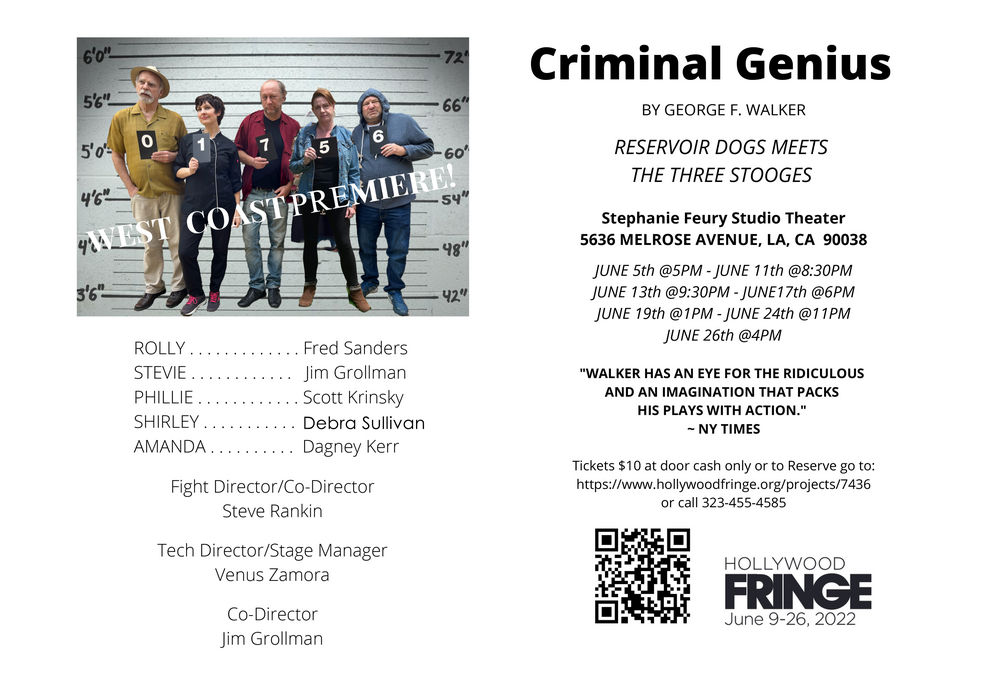 West Coast Premiere: Criminal Genius, a one act play, is the third play in George F. Walker’s six part “Suburban Motel Series,” which follows the events that take place within a seedy motel room. This play follows the excursions of the low life thug Rolly and his son Stevie. Rolly and Stevie have been hired by a Mafioso Boss to burn down a restaurant. Instead of torching the restaurant the two criminals kidnap the head chef who turns out to be the daughter of the man who hired them. The daughter then attempts to persuade the two criminals to raid her father’s mansion before he finds and kills the three of them. On top of this, the manager of the hotel where the two criminals are planning their excursions is demanding another nights payment which they don’t have. The group continues to plot different crimes that will enable them to save themselves. As the plans become more and more complex their failure becomes more and more inevitable.

“We’re back in the strange world of George F. Walker, where humor and horror waltz drunkenly around in each other’s arms. "
WASHINGTON POST

“Walker has an eye for the ridiculous and an imagination that packs his plays with action.”
NEW YORK TIMES

George F. Walker is one of Canada’s most prolific and popular playwrights. Since beginning his theatre career in the early 1970s, Walker has written more than 30 plays and has created screenplays for several award-winning Canadian television series. Part Kafka, part Lewis Carroll, Walker’s distinctive, gritty, fast-paced tragicomedies illuminate and satirize the selfishness, greed, and aggression of contemporary urban culture.
Among his best known plays are Filthy Rich (1979); Zastrozzi (1977); Theatre of the Film Noir (1980); Criminals in Love (1984); Better Living (1986); Nothing Sacred (1988); Love and Anger (1989); Escape from Happiness (1991); Tough! (1993); Suburban Motel (1997, a series of six plays set in the same motel room); Heaven (2000); And So It Goes (2010); and Dead Metaphor (2013).
Since the early 1980s he has directed most of the premieres of his own plays. Walker’s plays have been presented in more than 700 productions across Canada, the United States, and around the world; they have been translated into French, German, Hebrew, Turkish, Polish, Hungarian, Romanian, Spanish, Portuguese, Czech, and Japanese.
During a ten-year absence from theatre, he wrote mainly for television including the series This is Wonderland, The Line, and Living in Your Car. Awards and honours include The Order of Canada, two Governor General’s awards, five Dora Mavor Moore Awards, nine Chalmers Canadian Play Awards, and the Governor General’s lifetime achievement award.