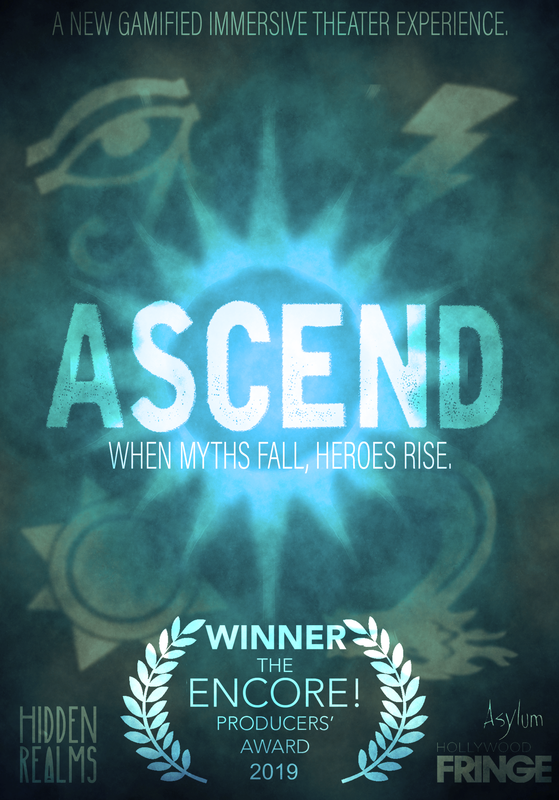 Ascend is thrilled to receive a 2019 Encore Producers Award! Don’t miss your chance to see the show!

The gods of four great mythological pantheons (Greek, Egyptian, Maya, & Chinese) call on you, their lost demigod children, to save them from an ancient threat. However, some of the gods have their own plans for this rising power. Go on quests to find the truth about the gods, prove yourself in divine challenges and ultimately decide how this story ends. With over 32 scripted ending combinations based on the audience’s interactions and choices, you control the narrative.

Many key narrative plot points and endings are entirely dependent on the choices of the demigod audience. The demigod audience may follow several suggested narrative paths through this multi-room production, but are encouraged to forge a path of their own throughout the evening in this theme park-like experience.

Before the show each demigod audience member will be asked to complete a short personality quiz revealing who their godly parent is, as well as what special power they’ve inherited. Throughout the experience, the demigod audience can participate in different branching quests and challenges such as archery and mummification before aiding the gods in a final battle.

You must opt-in to receive emails from us regarding on-boarding and the godly parent quiz for the event! If you do not receive the emails for some reason, please email us at [email protected]

Demigod audience members should anticipate being on their feet for the majority of this event.

See what our audience members have had to say!
“If you attended the Alita: Battle Angel experience, Ascend offers similar team-based challenges, but more in-game story. If you’ve done one of the large-format SCRAP escape games, Ascend has a similar structure, but with less pencil-and-paper work.” -Juliet Bennet Rylah, No Proscenium

“Basically, it is like if a LARP game possessed by the spirit of Zeus had a baby with a theatrical group and brought it to Fringe and – honestly – I think that’s my sales pitch for the show.” -Sarah Musnicky, Nightmarish Conjurings

“It creates one of the most enjoyable family-friendly productions that I’ve seen so far in both Fringe and Los Angeles.” -Erik Blair, Haunting.net

“The experience was unique and nothing like I have ever been apart of before.” -DL

“I expected a show that would be immersive, but that I would not be able to effect the outcome of. The fact that the audience could in such a unique way was fantastic.” -KP

“It was evident that every actor was putting their all into the characters in both scripted scenes and improv-ed moments. The sheer amount of life and personality brought to the production made it a knockout! Amazing actors. Amazing production. Y’all crushed it.” -AJ

“A fun blend of immersive theater, carnival, RPG, and history, Ascend puts you into the shoes of Unnamed Hero and let’s you do what you will with your time among the gods. Playful and fun, the biggest strength comes from the lack of linear structure, giving the audience ample time to gather what story or experience they wish.” -JD

“Overall, a fantastic, fun presentation, that never left me with a moment of pause or boredom.” -BG

“Knowing that I was on a first name basis with the gods by the end of the event was a pretty cool feeling.” -KP

“Had such a blast with this show!! I definitely want to see it again and choose a different path to see how different it can be!” -DS

“It’s an immersive joy for people of all ages.” -MD

“Bravo! Great work to all involved! Me and the group I came with spent about 6 hours last night talking about the experience, and I hope to check it out again before the fringe is over.” -KP

“I loved the stories and passion of the actors.” -AE

“Keep doing great for the rest of the run and I would love to be part of this group in the future.” -EG