From Toilet to Tinseltown 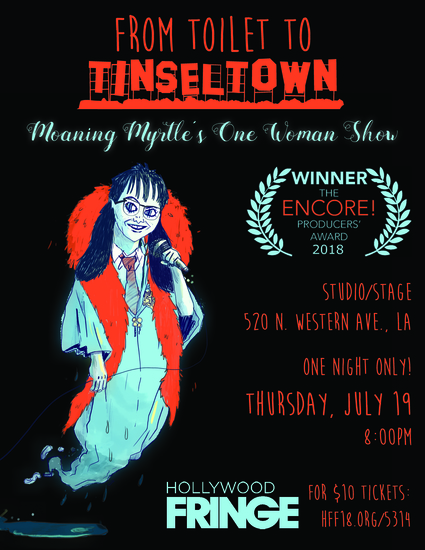 Winner of the 2018 Encore Producers Award!

“Maddie Patrick’s never-dropped, spot-on impression of Hogwarts’s favorite ghost is a delight … From the moment she floats on stage (in a brilliant staging device), Patrick has us hooked into the character, world, and story. The show is delightfully funny … The performance is laugh-out-loud funny, Patrick is adorable.” – Matt Ritchey, Gia on the Move

“FYI, Myrtle is a potty mouth, but she’s so damn funny … We laughed ourselves silly, and thoroughly enjoyed the ride … This one should definitely be on your list.” – Bob Leggett, Indie Voice Blog

“As Moaning Myrtle, Maddie Patrick (who was also the author) was hilarious … Ms. Patrick captured the attitude of the ghost well — petulant at times, playful, childish, but with surprisingly astute observations. It was a strong characterization and performance.” – Daniel Faigan, Observations Along the Road

Moaning Myrtle, everybody’s favorite ghost from the Harry Potter series, was forced to leave her toilet at Hogwarts years ago. After failing in the UK for a bit, she decided to come to LA for her shot at fame … or something like it. This is her dark and comedic one woman show, her chance to finally be seen (figuratively, of course).