A FAMILIAR AUDIENCE -the Best of INK @Fringe! 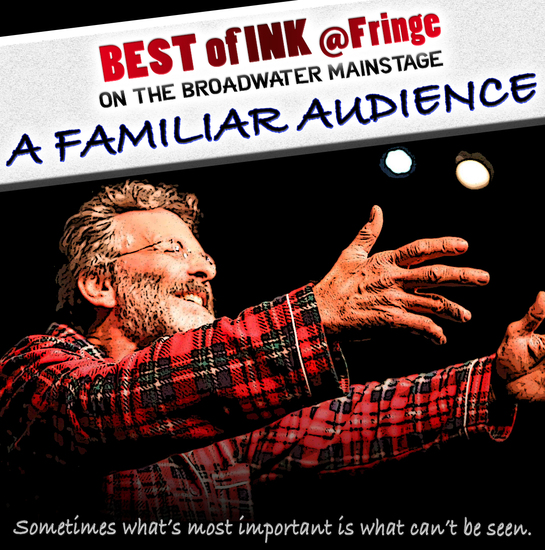 2Cents is thrilled to announce
The Best of INK @Fringe presents
A FAMILIAR AUDIENCE
has been selected for
THE BEST OF THE BROADWATER!

Don’t miss your last chance to experience this multi-award-winning powerful pairing of plays:

Two plays remind us that just because we can’t see something, doesn’t mean it isn’t there. An inexplicably engaging journey through one’s loss of those they love, and another’s loss of their own reality. This powerful pairing was selected out of the 22 plays in 2Cents Theatre’s 2018 Acting Out INK Fest of female playwrights to move on to #hff18 as a part of Best of INK @Fringe!

THE PORCH SWING
Annie struggles with getting her mother Carolyn to let go of her parents possessions as they empty the house after the passing of her father. When a loved one’s gone, are they preserved in the things they owned or the memories they made?
directed by Sophie Goldstein
starring Julia Sanford, Whitney LaBarge, Katherine McKalip, David Westberg

THIS ALMOST JOY
Friendly, rumpled Professor Hart-Meadows, an actor in what he believes is a rather dull play, decides to break the fourth wall and speak directly to the audience, engaging them in a conversation about clouds and beauty and the nature of reality. This causes great upset for the other characters in the play, his wife and sister, for whom the play is the real world. The confrontation intensifies as their desire to save Prof. Hart-Meadows from madness bumps up against the Professor’s quiet insistence on his own truth.
directed by Stephen Weston
starring Carl Weintraub, Stasha Surdyke, Danon Dastugue, Brian Keith Gamble

2Cents Theatre’s annual Acting Out INK Fest of female playwrights takes place over one weekend each March at the Hudson Theatres, celebrating over 20 fully produced plays all written by incredible women from around the country and UK. The Best of INK @Fringe program selects one block of plays from that year’s INK to continue on the the Hollywood Fringe! Visit www.2centstheatre.com for more information on INK Fest, or anything else 2Cents! Enjoy the ART!