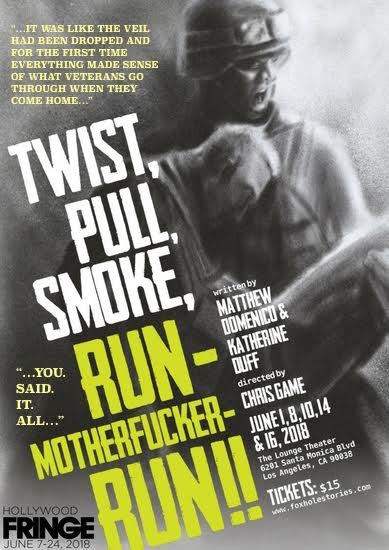 Fans of military drama, brutal realism, and thought-provoking theater will delight in this stunning new addition to the Theater of War genre. Playwrights Matthew Domenico and Katherine Connor Duff, along with director Chris Game, are proud to present the world premiere of The Foxhole Stories: Twist, Pull, Smoke, Run-Motherfucker-Run! to the 2018 Hollywood Fringe Festival.

The Foxhole Stories is a play series that encompasses every phase of the American-Veteran experience for the stage.

Twist, Pull, Smoke, Run-Motherfucker-Run is based on the conversations that Mr. Domenico had with two Marines from his former unit. He spoke with them not only about their common memories of Afghanistan, but about their experience acclimating back into civilian life. These two Marines and these conversations inspired this play. Twist, Pull, Smoke, Run-Motherfucker-Run! is the story of a combat veteran who evades his concerned girlfriend’s questions about his tour in Afghanistan, and instead argues with his relentless, ever-present PTSD. From Veteran to dependent alike, this project is driven by a cast that has all been touched personally by the Military community. This piece demonstrates the difficulty of living with Post Traumatic Stress Disorder and, simply and brilliantly, exposes a veteran’s innermost thoughts.

All veterans are invited to see Twist, Pull, Smoke, Run-Motherfucker-Run! for free. Just use the code “skate” at checkout for free tickets. This is your story told by veterans for veterans. We need only your participation in helping the world understand.

Preview Night ‘Pay What You Can’
Discount Code: Preview