How to Be A Virgin (in 12 morally ambiguous steps) 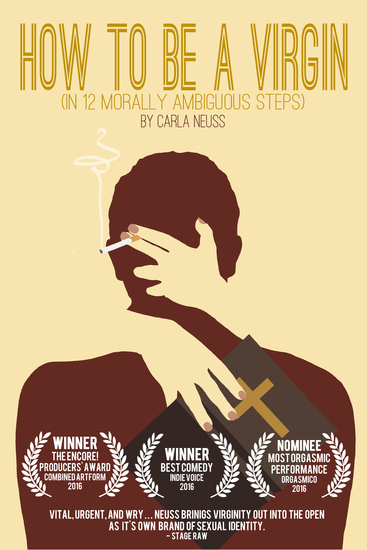 Critics are saying :
“Neuss’s writing is fresh and unpretentious. A thoroughly enjoyable one hour of Fringe time packaged with a lot of laughs, some spicy adult topics, and plenty of situational humor.” – Ellen Dostal, Broadway World

“A vital, wry and urgent take on something that is often mocked or only discussed in hushed tones. Neuss brings virginity out into the open as its own brand of sexual identity.” – Maureen Lee Lenker, Stage Raw

“Not only is it wonderfully written, it is brilliantly directed and lovingly performed by two comic geniuses. This was probably one of the best hours I have ever spent at Fringe.” – Bob Leggett, Indie Voice

Only 2% of the population is still a virgin by the age of 30—and one virgin wants to talk about it. According to her, there is a tried and true recipe for being—and staying—a virgin: 1) moral peer pressure (think Christian purity rings), 2) an unconsummated first love affair, and 3) an abiding commitment to feminism (yay women’s agency!). But it hasn’t been easy. The First Love set the bar really high for falling in love. The Ugandan didn’t quite understand cultural differences. The Most Beautiful Man in the World needed a shoulder to cry on. And then there were the others… All in all, it’s been a long bumpy road for a virgin going-on twelve years unpenetrated. A hilarious and unexpected journey through twelve different stages of love and lust, How to Be a Virgin shines a light on this often silent subculture and comes to some surprising conclusions about love, sex, and identity in the world of a 21st century hunt for giving it up.