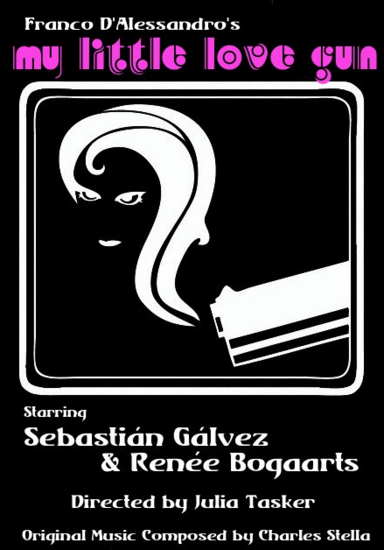 An apartment bedroom in New York City. It is late at night; some moonlight can be seen as if inspired by an Edward Hopper painting. The HUSBAND enters the bedroom quietly with his shoes in his hand. The WIFE is up, sitting nude in bed, half-asleep, waiting…

My Little Love Gun – a woman’s waking dream involves her cheating husband and a gun as she attempts to make sense of a world and a love gone mad.

The play attempts to answer: How and why does communication suddenly break down between two people who love each other? And how do we preserve our singularity while endeavoring to become a couple?

The play is created out of the writer’s genetic force: Italian sensual semantics mixed with Irish playful polysemy. A pistol is the only solution for amore. In this bedroom the playwright is second-guessing the sufficiency of the spoken word, the fear that all language is simultaneously tainted and infinite. It’s as if Albee, Pirandello and Williams conspired to write a play for Marcello Mastroianni and Sophia Loren.

The author’s suggestion for the actors: “Make it sexy! Get caught in the dream world. This play works when the mind is both sexually and intellectually aroused!!!”