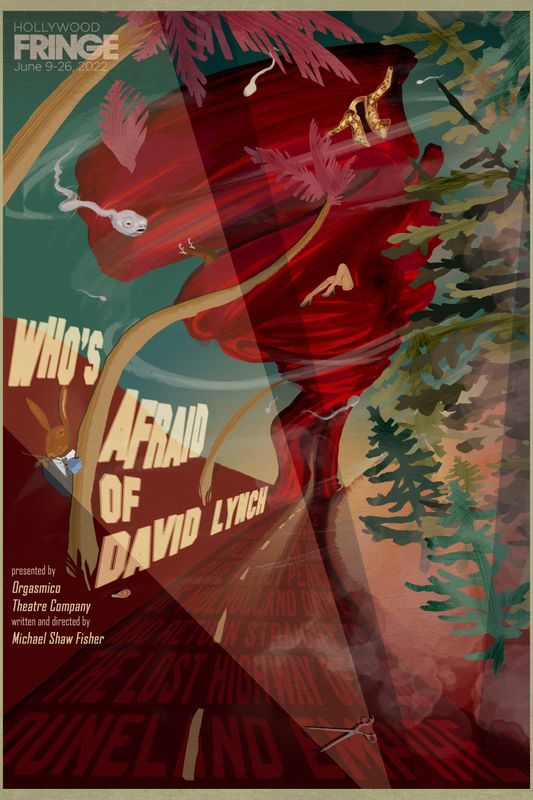 WHO’S AFRAID OF DAVID LYNCH?
(or “How to Erase Your Elephant’s Heart on the Blue Velvet Peaks of Mulholland Drive and Return Straight to the Lost Highway of the Duneland Empire )

…leaving only his hairdresser Judy to try and solve the mystery. However, in doing so, she will plummet into a darkly absurd world of such, sexuality, violence, and nightmarish confusion that only David Lynch himself, and his fans (or haters) could possibly fathom. Songs from his uncompromising cinematic catalogue will ensue. Prepare yourself to enter a place both wonderful and strange.

CRITIC REVIEWS FOR THE DEATH OF SAM MOBEAN

Stage Raw Top 10!
“RECOMMENDED – The ensemble is excellent, though my personal favorite is Heather Schmidt, who suddenly turns up in the third scene (of course, without explanation). She is funny, inventive, compulsively watchable..”
-Stephen Fife

“…the smartest, most fiercely enacted, most engaging and mysterious piece seen thus far by these eyes at Hollywood Fringe Festival and the journey of discovery offered here is one that should be left unspoiled for those who will be able to witness it.”
- Christine Deitner (The Theatre Times)

“LA Weekly, “Shakespeare as a Rock Star…For sheer entertainment value and uncanny comic timing, Shaw’s dozen-song impersonation of an alcoholic and dissipated Shakespeare on the eve of his death — defending his authorship from posterity’s naysayers — can’t be beat.”
-Bill Raden, LA Weekly

“…overall, this is the apex of this talented artist’s work up to this point and his medieval pop score is unmatched in its wit and originality…”
-Colin Mitchell, LA Bitter Lemons

“Gold Medal Winner – Shakespeare’s Last Night Out” is a wonderful show, both funny and touching, that should not be missed!"
-Earnest Kearney, thetvolution.com

“This tavern musical is a must see for any adult looking for a night of intellectual literature and folk rock songs over a drink.”
-Laura Tull, Examiner.com

“LOVED IT!!! Fisher is masterful in his portrayal of William Shakespeare – incredibly fluid in his movements, fully transforming from character to character & bringing the audience along for a ride they’d never forget.”
-Cyanne Mcclairian

“…One of the tightest pieces of theater I have seen yet. Please go see this!”
-Lindy Voeltner

“I really loved this crazy new rock musical…It’s the kind of show that embodies all that is the best about fringe.”
-Ellen Dostal, Broadway World (Werewolves of Hollywood Blvd 2014)

“It’s a blast.. The show’s tongue in cheek vibe is right in the Rocky Horror veign."
-Lyle Zimskind, The LAist (Werewolves of Hollywood Blvd 2014)

“May these werewolves howl for a long time to come."
-Rob Stevens, Haines His Way.com

“Always delivered with delicious gusto.. As with the rock score and entertaining lyrics, there isn’t a false note among the cast."
- LA Weekly

“My socks were knocked off over and over again.”
- LA Examiner

“Wildly exhilarating.. As effective a rock musical as anything since “Hedwig and the Angry Inch.”
-Backstage

“It’s all just so lovely and sad and complicated, and most of all, hilarious."
- LA Splash