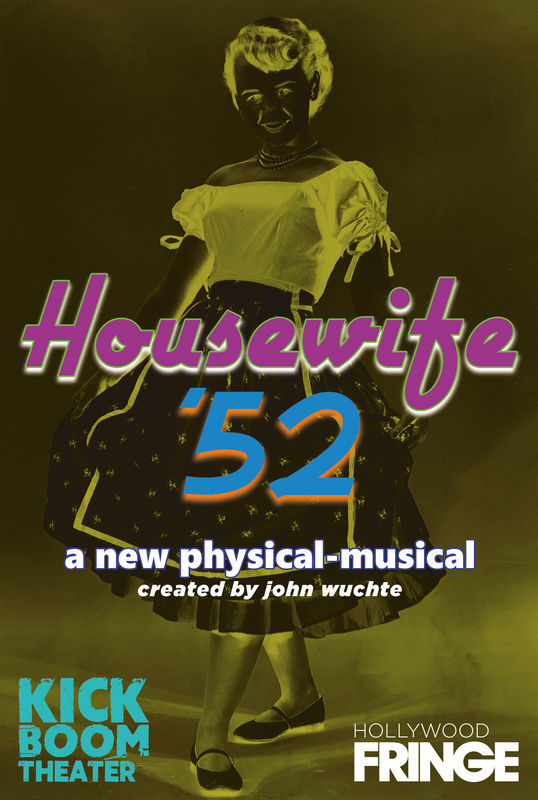 PROOF OF VACCINATION AND MASKING WILL BE REQUIRED DURING THE ENCORE PERFORMANCES!!*

Wuchte brings his percussive method to create a cacophony of sounds and explosive choreography. His songwriting partner, the award winning Michael Teoli, is once again joining him on this journey.

A day in the life of 4 women and the men in their lives in 1952. Harold got a promotion and Judy is preparing for the big party. As the women wake, we learn of their dreams and fears and follow them through the day. Secrets are revealed, deceptions confronted, Tupperware burped, and laundry is folded.

Nominated for BEST MUSICAL! Winner of BEST OF BROADWATER!

“The cast is perfection in vocal prowess, dance moves and characterization. Wuchte announced at the show’s conclusion that the piece had been in the works for years and there were about 100 hours of rehearsal required. It’s easy to see that it all paid off. To paraphrase Velma Kelly, “they do it in perfect unison”. Housewife ‘52 is sure to be among the top shows of Fringe, probably of the year. Don’t miss it!”
Rob Stevens/Haineshisway.com

“John Wuchte and his Kick Boom Theater ensemble take musical theater and dance to a new level, offering a combination of incredibly intricate and perfectly executed movement choreography performed by 7 brilliantly talented performers, all set to soul tingling music performed by four musicians. I adored everything about this World Premiere production and plan to see it again! Do not MISS it”
Shari Barrett/Broadway World

“How to describe Housewife ’52? Part musical, part physical theater, it is at times disorienting, yet wholly and completely captivating. This highly percussive piece incorporates hypnotic drumming, and precise, almost animalistic choreography. Go into this show knowing it won’t be your typical musical; I was expecting Rodgers & Hammerstein, but what I got was SO much more interesting.”
Julia Stier/Stage Raw

“A toe tapping denunciation of sexism in America – you’ll leave humming the tunes! A PLATINUM MEDAL! A show that is both inspired and evoking”
Ernest Kearney/thetvolution.com

“Incredibly tight and specific ensemble show and not your typical fringe fare. It’s a musical but not your typical musical. It’s a dance piece but of its own kind. Each and every one of the cast members were amazing, specific and exciting to watch”
CJ Merriman/Theater Theatre Podcast