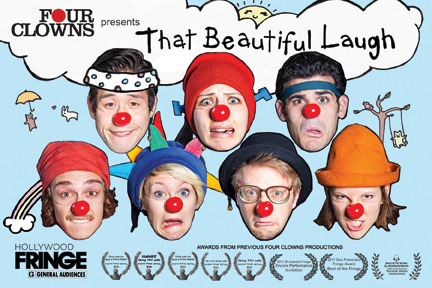 “it was heartwarming, sweet, sad and extremely unforgettable as this cast of characters stole its way into our hearts.”
- Bob Legget, Los Feliz Examiner

“They surprised us, they gained our trust and they broke our hearts. After all that, they asked if we were ready to find laughter again. And we were.”
- Alison Royer, Life in LA

“I may have smiled once or twice” – Pauline Adamek, LA Weekly & Arts Beat LA

“And while laughs abound, there are also moments of real stage beauty, of real gravitas… which always leads back into laughter.” – Larry Pontius, Bitter Lemons

“Munch brings his intense skills as a director to bear to create some truly magical moments” – Noah Nelson, Turnstyle

“You will laugh, cheer and celebrate the spectacle before you like you have never before, and at the end, you will find yourself victorious in a journey similar to their own.”
- Marlon Deleon, Long Beach Examiner

Departing from his home, the moon, a wise old man travels with his weathered precious trunk to a world that has forgotten how to laugh. Hoping to extinguish cynicism and judgement and replace it with joy and curiosity, he brings an arsenal of clowns, ignorant to the rules of the world. Together, these clowns must embark on a quest to find that beautiful laugh. Searching through each other and their audience the clowns will discover and examine every avenue of laughter; love, joy, mischief, pain, fear, sadness and more, hoping to find the laugh that they have all been waiting for…That Beautiful Laugh. 2011 Hollywood Fringe’s Top of the Fringe winner and national touring troupe, Four Clowns bring you a show about the joys of laughter. Directed by Turner Munch, director of 2011 Hollywood Fringe hit, Porter’s Macbeth.