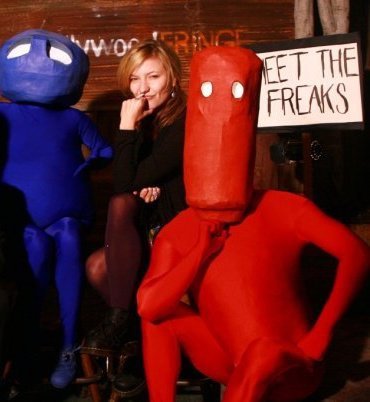 Kat is a Fringe veteran who has produced, performed, written about Fringe, hosted panels, and been a Fringe Freak since HFF was founded. Her most recent HFF production was Robot Teammate’s 4th scripted musical, POCKETS!, winner of BEST MUSICAL and SOHO PLAYHOUSE ENCORE EXTENSION at the 2019 Hollywood Fringe.

She also co-created and starred in Robot Teammate’s THUG TUNNEL, winner of A Little New Music’s Outstanding Songwriting Award and the Encore Producer’s Award in 2017, and 2015’s sold-out run of the world premiere scifi musical TIMEHEART.

Kat also produced and performed in the Best of Theatre 2011 award-winning show, GIRL BAND IN THE MEN’S ROOM, was an Associate Producer for acclaimed troupe FOUR CLOWNS, and led Limehouse Theatre Co. to Top 5 Picks of the Fringe at Prague Fringe 2008 with HALLUCINOGENIC TOREADOR: A DADA EXPLORATION.

A former columnist for LA Bitter Lemons and reviewer at LA Theatre Review, Kat holds a BFA in Theatre Performance from the Honors Tutorial College of Ohio University and a minor in Media Criticism. She currently supports people in grief and people who are dying with her practice as the Good Grief Doula and makes indie dream pop music with her band, SUMEAU.