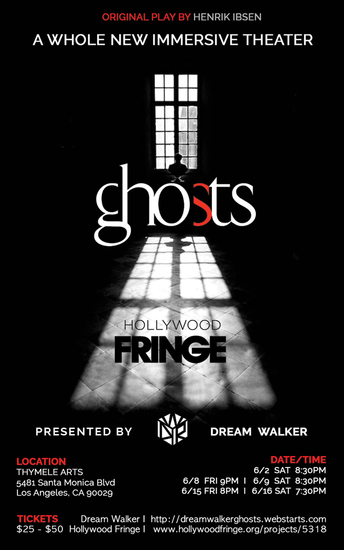 “I almost think we are all of us ghosts, Pastor Manders. It is not only what we have inherited from our father and mother that “walks” in us. It is all sorts of dead ideas, and lifeless old beliefs, and so forth.."

- Helene Alving, from the play

GHOSTS is an immersive theatrical experience based on Henrik Ibsen’s play of the same title. This world premiere is created by international theatre company, Dream Walker, and explores the multiple shades of morality in the 19th century.

The original play, Ghosts, is a scathing commentary on 19th-century morality. Because of its subject matter, which includes religion, venereal disease, incest and euthanasia, it immediately generated strong controversy and negative criticism. Since then the play has fared better, and is considered a “great play” that historically holds a position of “immense importance”

Helene Alving has spent her life suspended in an emotional void after the death of her cruel but outwardly charming husband. She is determined to escape the ghosts of her past by telling her son, Oswald, the truth about his father. But on his return from his life as a painter in Madrid, Oswald reveals how he has already inherited the legacy of Alving’s dissolute life.