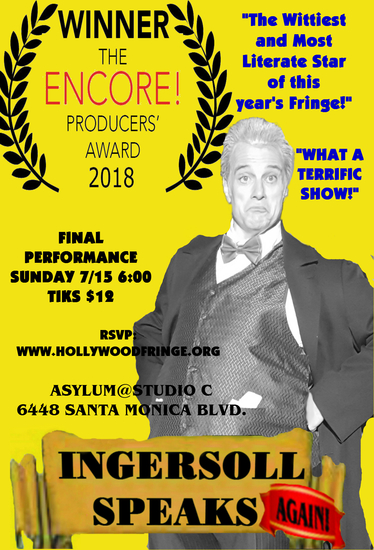 BY POPULAR DEMAND – AN EXTENDED ENCORE PRODUCTION OF
“INGERSOLL SPEAKS!” FROM HF 2017

THE GREATEST AMERICAN YOU’VE NEVER HEARD OF.
Robert Ingersoll (1833-1899) The most influential intellectual in American history; a tireless activist, Ingersoll supported equal rights for minorities, called for women to be given the vote, and was the inspiration for both the U.N. and the birth control pill.

He was also the most outspoken foe of religion this country has ever known, and the father of America’s Golden Age of Freethought .

“The name Robert Ingersoll is in the pantheon of the world.” Eugene Debs

“I have only but known two truly great men. Abraham Lincoln and Robert Ingersoll.” Frederick Douglass.

“Go if you dare and tremble because it is not an old philosopher but a passionate advocate for freedom and justice and, yes, compassion on that stage.”

“I loved the originality, authenticity, relevancy and resurrection of using public speaking from a man who lived over a hundred years ago. It is shockingly applicable for current political woes.”

“My goodness I enjoyed this show. A beautiful and inspiring solo piece about an American patriot and thinker who’s been virtually ignored by history, yet whose words and advice on saving our democracy are powerful and necessary even today. So well performed by Ernest Kearney.”

“An hour that went by in a moment. Wonderfully conceived, thoroughly compelling and illuminating. Too short!”

“Should be called INGERSOLL ROCKS!”