Is There Sex After Marriage? 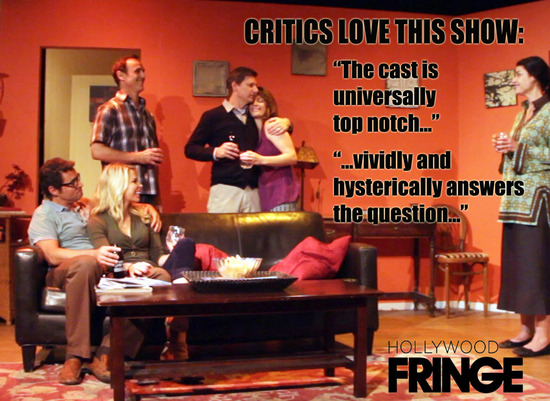 PICK OF THE FRINGE from Fringe Management and Combined Artform!

“Riotously written and maniacally directed” Is There Sex After Marriage? is insightful social and psychological commentary on American relationships. Three different couples – the lovers, the fighters and the let’s-get-alongers “vividly and hysterically answer the question.”

Playwright-director Jeff Gould has found a formula that works. Several years ago he had a huge hit with his play It’s Just Sex!, which played off-Broadway and all over the world and enjoyed a two-year run in NOHO. Gould has returned with a new comedy that is an offshoot of his former hit. In Is There Sex After Marriage? he once again charts the marital woes of three couples, examining their interpersonal dynamics with a sparkling sense of humor.

Each couple presents a marital snapshot. Sherry and Roger (Jeff Witzke and Challen Cates) are languishing in the doldrums, so they frequently socialize with two other couples. While neighbors Mindy and Joe (Monica Young and Vince Duvall) can’t help making passive-aggressive comments and taking pot-shots at each other, Beth and Zack (Autumn Withers and Darren O’Hare) can’t keep their hands off each other, even after eight years of marriage. That gets the others wondering: What’s their secret? How are they keeping the romance alive?

When Sherry and Roger inadvertently wander into a swingers’ party, an attempt to spice up their marriage inevitably blows up in their faces, leading to a shift from light comedy into a serious discussion that borders on a group therapy confessional.

With his perspective on marriage, fidelity, lust and trust, Gould gives voice to all facets of a troubled marriage, often dividing the discussion along clichéd gender lines. In Gould’s world, women hold all the power, getting to decide when sex is going to happen or when a discussion is over. For the most part, Gould keeps it light and, at a mere 75 minutes, the play zips along until its satisfying denouement.