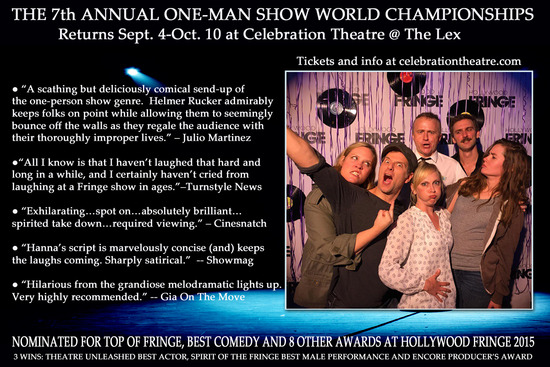 Encore Producers’ Award! Added show on July 17 at 8 pm. Click on “tickets” to get a seat!

“Hilarious from the grandiose melodramatic lights up…When I say, hilarious beyond all measure, this show needs an extension after Fringe.” — Gia On The Move

“The entire cast is spot-on, running with archetypes of solo performers and just nailing their bits…All I know is that I haven’t laughed that hard and long in a while, and I certainly haven’t cried from laughing at a Fringe show in ages. The other thing I know is that I want Hanna to write more and Rucker to direct more. Whatever these two have going on next I’ll be there.”—Turnstylenews.com

“… a scathing but deliciously comical send-up of the one-person show genre—embedded with a plethora of achingly familiar clichés, also inventing a slew of new ones.”—Bitter Lemons

Trent “The Soul Mirror” Isaacs is the 6-time reigning, defending world champion, returning to crush and humiliate the competition at this year’s One-Man Show World Championships, “The Tourney of the Journeys.” His epic piece, “Stumbling Toward Valhalla” is sure to obliterate all of the other regional champs: Ally, the over-earnest and far too graphic little firecracker telling the story of her path from girl to woman in “Who Moved My Yurt?” Shelby and her terrifically inappropriate re-imagining of the life of Sharon Tate, “I Am Not Mrs. Polanski’.” And the wildcard of the group, the second runner up at the West Regionals sent as a substitute, Gary. Can this rookie and complete unknown shock the solo show community and pull the upset? Tears will flow, impressions of elderly family members will fly and ponderous journeys of self-discovery will drag on in this affectionate and biting send-up.