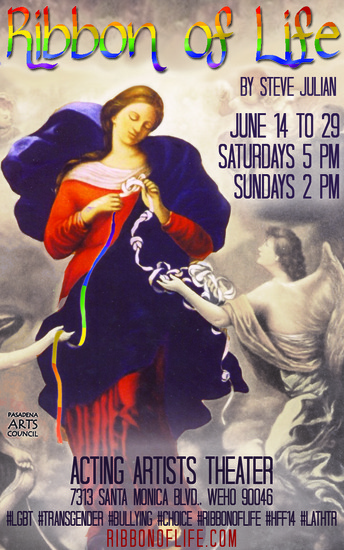 Ribbon of Life is a comedy. At times. It is Savannah’s 25th birthday and the party erupts when she comes clean with her parents: Her friend, Ezmae, is really a transgender woman – and they are in love. Two years into her transition, Ezmae has relied mostly on hormones. Savannah’s father, Simon, cannot come to terms with Ezmae’s interest one day in having an orchiectomy. Acceptance is no easy task for him: he is a man’s man, a former religious leader who clings to very conservative values. Can love be more than lip service for this family?

Inspiration for the play is drawn from Johann Georg Melchior Schmidtner’s painting, “Mary, Untier of Knots” c. 1700. “The Ribbon of Life that Eve tied into knots through her disobedience, Mary, by her obedience, has loosened and made straight. Through her, we are disentangled,” Simon, Act II, scene 3.

The playwright has taken artistic license with the image: The knotted portion of the ribbon remains white; the untied portion is in rainbow colors to pay tribute to the LGBT community and the character of Ezmae. #lgbt #transgender #choice #dramedy #drama #comedy