Short Plays for All Your Problems! 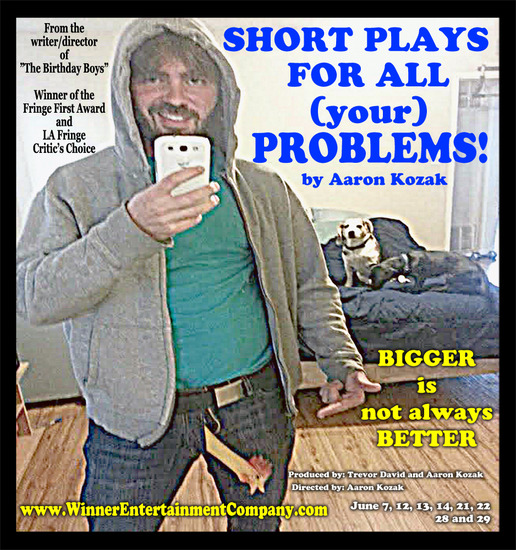 You have problems. You pooped your pants in 3rd grade. Eric Tandy pooped in your hat in 7th grade. Then the high school goth phase. Now, you’re poor, getting fat, making terrible life decisions. You’re just like me. You have problems. We have plays. Short plays. To some, the short play is a play, but only shorter. To others, a sketch, but only longer. There are those who believe anything shorter than an hour is a short play, or perhaps they identify it by its number of acts. Some call the short play a one-act just like the other one-acts. Some call the short play a ten-minute play, and some even call the ten-minute play a one-act. As for rest of the world, they have no idea what we’re talking about. Well, that’s about to change. SHORT PLAYS FOR ALL YOUR PROBLEMS! is one man’s quest to make the short play cool again. This twisted and hilarious compilation from the writer and director of “The Birthday Boys” offers a unique and unhinged perspective on the cosmos, and humanity’s many, many terrible problems.

producer, writer, director, poet who did know it and told everyone he was repeatedly