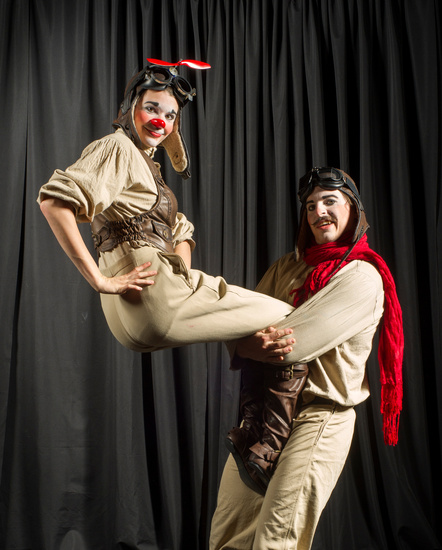 with additional nominations in:
Best Comedy
Ezra Buzzington “Spirit of The Fringe” Award
and
O-Face Most Orgasmic Performer (Amica Hunter)

Beau and Aero, two incompetent aviators, explore flight, folly, and the world around them in this family friendly physical comedy production. These acrobatic clowns live in a world where balloons are bountiful and laughs are abundant. Wendy Gough (Certified HFF Reviewer) describes the show as “Not specifically a ’children’s show’ but definitely kid friendly.” The show combines elements of clown, mime, acrobatics, dance, puppetry, and object theater to create a playground of the imagination. Neither balloons nor parachutes will get this unlikely duo off the ground, but their antics are sure to make your spirits soar. Prepare to take flight with a company that’s A Little Bit Off!

“…this dynamic duo of acrobatic and balloon buffoonery is actually a quite seriously funny, dramatic, and highly technical stage play…”
-Valley Scene Magazine
Read the full review below