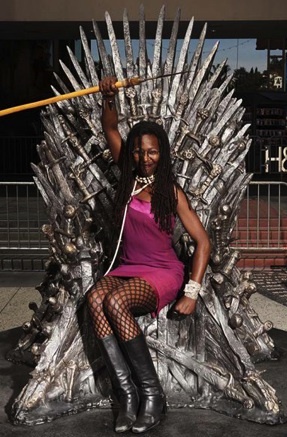 Pam Noles is a former cop reporter and features columnist whose work has appeared in outlets ranging from the Los Angeles Times to Vibe Magazine. She now hustles up work as a stage manager (including Catch the Tiger, Sabado Mornings, Hell Cab, Lone Star, The Watsons Go to Birmingham, Proof), and costume designer (Zombies from the Beyond, Lovecraft: Nightmare Suite, Amon Amrath’s Father of the Wolf, Revolutionary the Musical, Jingle A-Go-Go, and many Renaissance Faire participants).

A graduate of the Clarion Writer’s Workshop, her fiction has appeared in anthologies from Warner Books, Dark Horse Comics, Terra Major, Pulphouse and various APAs.

Her embossed rejection from the New Yorker – complete with a handwritten note from an anonymous editor – is framed and proudly displayed in her living room.

She lives on Twitter @BGFCentral and will get back to updating her highly random blog, And We Shall March, any day now.

Do not ever ask her why Grendel should have kicked Batman’s ass during that crossover unless you have a lot of time on your hands.