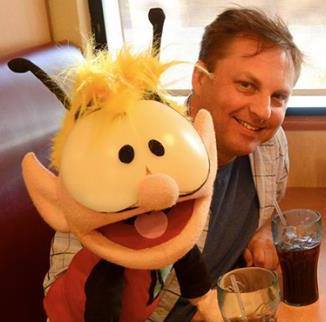 When Steve was six years old, he couldn’t decide whether he wanted to be a cartoonist or a puppeteer when he grew up. As a result of this indecision, he’s built a career out of doing both professionally.

As a cartoonist, he was one of the first people to start posting a comic a day online. His webcomic, “Melonpool,” ran for 10 years from 1996-2005 — predating the word “webcomic” as well as most of the social media we now take for granted. Late in 2014, he relaunched the strip as a new rebooted daily feature, which continues to this day at www.melonpool.com

As a puppet designer, builder and puppeteer, Steve has worked for such TV shows as “Glee” and “Teen Titans Go!” as well as several commercials, videos, e-cards and anything else that requires puppets — including Ed Sheeran’s MTV Music Award-winning video “Sing!” in 2014. He recently opened Puppet Design Studio with BJ Guyer. Their work can be seen at www.puppetdesignstudio.com

A lifelong fan of science fiction, Steve is thrilled to be designing and building all of the elaborate puppets for “Alien vs. Musical.” He is also co-writing the book with Erik Przytulski his best friend and collaborator since meeting in 8th Grade in San Diego.

While not making puppets, drawing comics or writing musicals, Steve spends most of his time with his Italian Greyhound, Tilly — who coincidentally enough — looks like an alien.