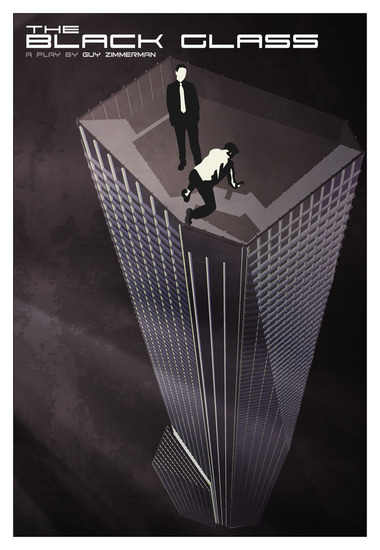 A blistering and darkly comedic deconstruction of corporate power in the age of Occupy Wall Street and internet porn by the award-winning playwright and director Guy Zimmerman. One of Los Angeles’ leading theatrical voices, Zimmerman delivers a searing indictment of the current neo-liberal mores in a story involving intrigue after hours in an office in downtown Los Angeles. In return for the CEO position at his LA-based corporation, Bentham offers his daughter to the sinister McGivern. McGivern’s two female cohorts have very different ideas, and the play takes unexpected twists and turns on the way to an explosive denoument.
While The Black Glass indicts the way greed and aggression have been institutionalized in the recent past, the playwright wanted to push further into a more positive landscape toward a new paradigm, and how we might step off of the trajectory we are traveling. The institutional form of aggression, the play argues, is the infamous military industrial complex. The institutional form of desire is consumer culture and, in particular here, the porn industry – desire on steroids. The play connects with the Occupy Wall Street ethos in the sense that new ways to arrange our affairs economically and socially are available to us if we have the courage to work collectively. While the play retains a tragic aspect, it has a sense of humor about itself a theatrical playfulness that keeps pace with its larger concerns.
The artistic director since 2001 of LA’s landmark new play theater company Padua Playwrights, Zimmerman here teams up with a cast that includes Open Fist Artistic Director Martha Demson and Fist member Elizabeth Greer.