Autumn and Other Plays 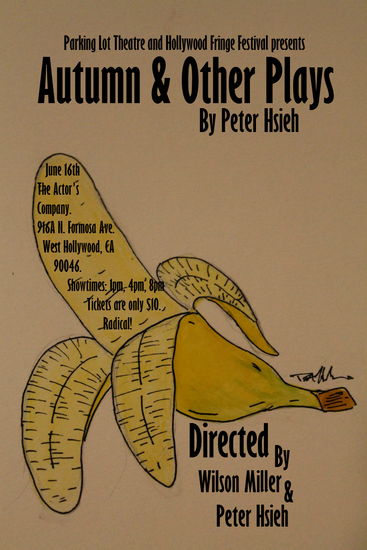 Autumn and Other Plays is a collect of 3 one acts by playwright/director/actor Peter Hsieh. This collection of plays includes Autumn, an experimental dark comedy about friendship, missed connections and unrequited love. The story follows two college graduates Chester and Patrick and their inability to express their feelings and desires about they women they love and about each other. It is a high energy show full of raw unprocessed emotions, violence, and laughs. Colorado Bay Horse is a short comedic play about two ‘psychic’ women and a playwright. Set completely in a diner late at night, one of the women channels a horse named David whom in another life used to be the other woman’s husband, while the playwright sitting at nearby table watches as the mayhem ensues. The Long and Lonely Howl is short surreal drama set in the 1880’s. Two friends Bill and Mack are sitting around a campfire in the open country one night talking about their lives, as the play develops we learn that Mack has been having an affair with Bill’s wife and is here to settle things but that Bill may also have a few tricks up his sleeve. The Run time for the three plays should be approximately 1hr20min.

These three plays have all been staged read before at least once (Autumn has had two stage readings) and The Long and Lonely Howl has been workshopped at UCI as part of a student run short play festival. None of the plays have been produced before. In the pictures section I have included photos of one of the staged readings where Autumn and Colorado Bay Horse had been read as well photos of plays that I have written that have been fully produced, some of them I directed and some were directed by others.