Sister Mary Ignatius Explains It All For You 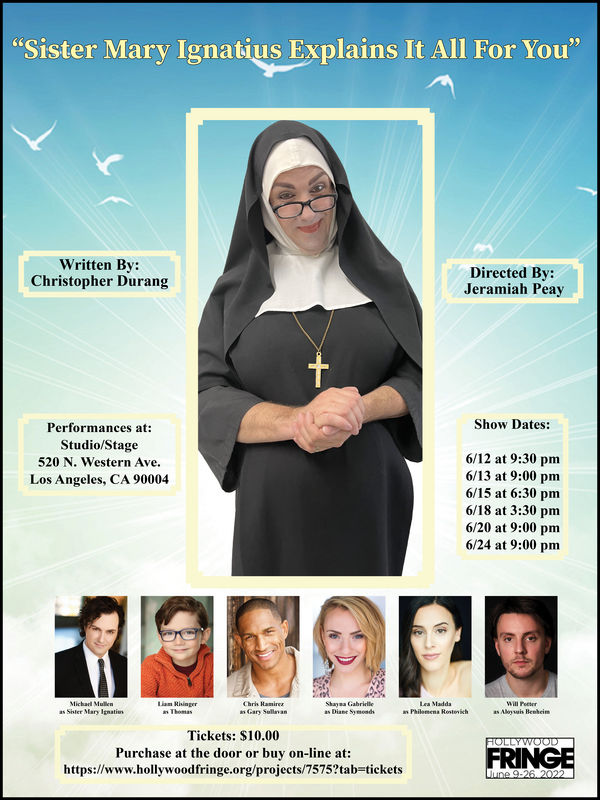 At a Christmas lecture, a nun named Sister Mary Ignatius explains to the audience the basic tenets of Catholicism. She is assisted by her favorite student, seven-year-old Thomas. From time to time, she asks him catechism questions and gives him a cookie for every right answer. Half-way into her speech, four of her former students, Gary Sullavan, Diane Symonds, Philomena Rostovich, and Aloysius Benheim, enter dressed as St. Joseph, The Virgin Mary, and two halves of a camel. The four remind Sister that she had asked them to come in and perform the pageant they once performed in her class. After the pageant, it becomes apparent that the four have strayed from her teaching; Diane has had two abortions (the first one from a rape at age 18), Philomena is an unwed mother, Aloysuis is an alcoholic who beats his wife and is thinking about suicide, and Gary is gay. They reveal that they were never asked to come in and merely wanted to embarrass Sister. They each have their own reason for hating her; Aloysius was refused bathroom privileges frequently and now has bladder problems, Philomena recalls being hit by Sister for being a poor student, Gary is there on behalf of his boyfriend Jeff, and Diane had believed Sister until her world came crashing down when her mother died of breast cancer and she was raped the same day. Diane reveals that she has brought a gun to kill Sister, something the other three were not aware of. Sister grabs a gun from behind her lectern and shoots Diane in self-defense. She also shoots Gary, proclaiming that she has sent him to heaven, as he went to confession earlier that day. She then points the gun at Aloysius, who needs to go to the bathroom, before handing it to Thomas to take a nap. The play ends with Thomas pointing the gun at Aloysius while explaining the perfections of God, Diane and Gary’s dead bodies on the floor, and Sister asleep.

This brilliant funny play is written by Christopher Durang!

The production is directed by Jeramiah Peay.