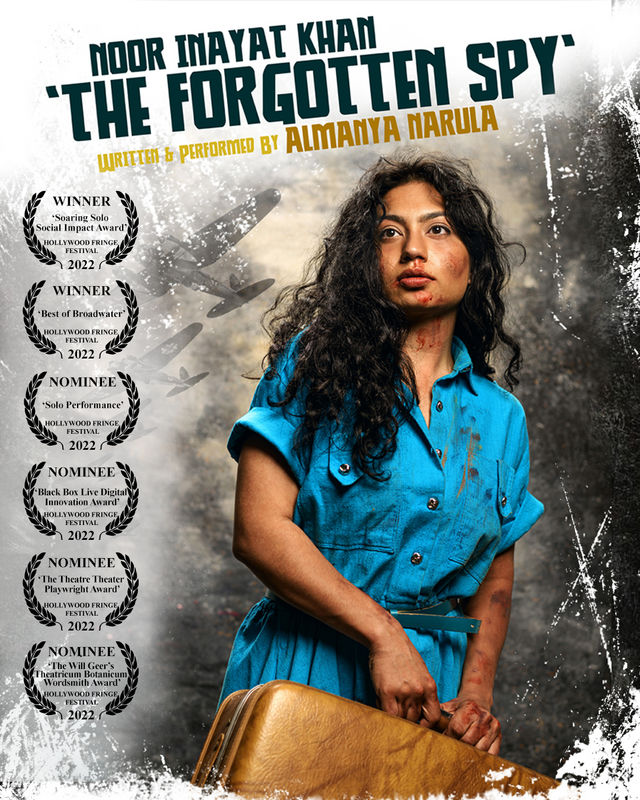 An important inspiring story of heroism that was left out of the history books.

Now cornered by the Nazis with nothing with death assured to her. In her final moments she will remind us who she is, why she matters and why she will always be in part of history. She fought alongside her enemy, the British to fight a greater threat – the evisceration of life as we know it.

The Nazis never forgot her name and after tonights show you wont either.

Indian-Thai actress and writer Almanya Narula makes her Los Angeles stage debut as Noor Inayat Khan. A thrilling imagining of the last 30 minutes of her life before execution by Nazis, her final choices will change the outcome of a war we thought we knew everything about.
—————————————————————————
A brief background on Noor Inayat Khan
—————————————————————————
In 1943, Noor Inayat Khan, former children’s book author, Sufi singer, and direct descendant of the Indian Emporer Tipu Sultan became the first woman and Indian to be sent out as a spy & wireless operator under Churchill’s orders in Nazi France.

She saved countless lives who were part of the resistance and gathered information that proved key to the allies winning the war on D-DAY. Written off as clumsy and ditsy, she beat the odds and lasted longer than most of her counterparts until she was captured, tortured, and executed by the Gestapo at Dachau after subjecting her to ‘Nacht und Nubel’ (Night and Fog- disappearance without a trace).

The average life span for a wireless operator in the field was six weeks. Despite Noor’s entire network being sabotaged by the Nazis, and the fact that she was seemingly the last person to be trusted for the job, her tenacity and will to fight for the greater good allowed her to keep going for months without getting caught by the Gestapo.

Alas after betrayal by a double agent, Noor was caught and kept in Avenue Foch for questioning. Noor never broke.

But after several escape attempts Noor was forced to sign a document to either declare that she was staying put or be subject to ‘Nacht und Nebel’ (Night and Fog) – disappearance without a trace by sending the captive to a concentration camp.

The decision rested on Noor: Sacrifice her short life for the sake of many or give in to the powers that be.

In the end Noor was a pacifist who fought savagely, a clumsy klutz who managed to climb building after building, a Sufi whit a “no lying code” who lied constantly, and an artist who braved torture.

Fighting for the right thing does the darndest things to people. Or does fulfilling one’s purpose bring out who one truly is?