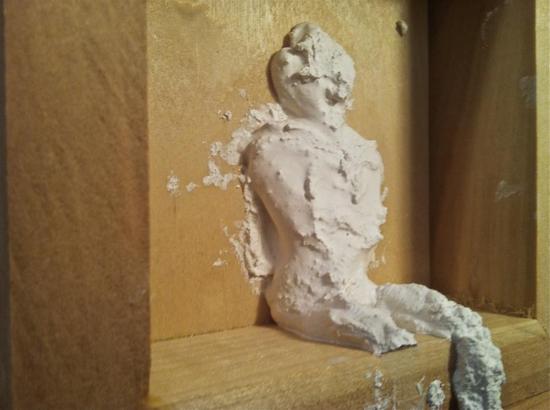 WINDOW is a turning point for Margaret, the protagonist. BOX, Act I, began during Margaret’s resuscitation from an attempted suicide. In that liminal state, an otherworldly film crew appeared to direct a dream to aid in Margaret’s recovery. The problems begin when the chosen Hollywooddirector, Wilhelm von Kink (Billy), dead himself for 35 years, refuses to follow the screenplay. Mac, his smart, up and coming female assistant, has to convince the Director that real art can be made with dreams and that Margaret has a right to live. Billy is not convinced, and Margaret is led to the coffin by her Shadow. Entering the coffin sets Margaret off on a journey to the underworld and “The Red Shard” dream sequence that brings an encounter with Coffin Girl, the shadowed, disowned and disembodied aspects of herself. If Margaret can recognize Coffin Girl and The Red Shard Dream as part of herself, she may have a chance for a life she really wants to live.