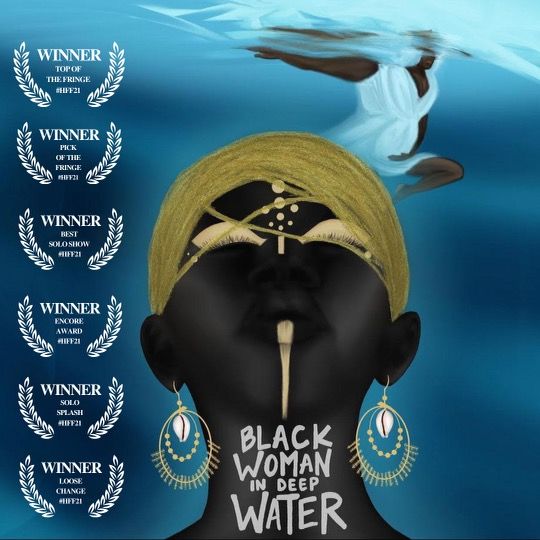 OFFICIAL WINNER OF THE TOP OF THE HOLLYWOOD FRINGE AWARD, BEST SOLO SHOW AWARD, HOLLYWOOD ENCORE PRODUCERS’ AWARD, PICK OF THE FRINGE AWARD, SPLASH SOLO AWARD, and LOOSE CHANGE AWARD ****
Black Woman in Deep Water has its world premiere August 8, 2021 at the Hollywood Fringe Festival. Written, produced, and starring a first time Fringe participant, Makena Hammond, a former naval physician turned actress/model/playwright, and an AADA graduate,  “Black Woman In Deep Water” is inspired by the incredible true story of  Margaret Garner, a runaway slave, who escaped with her husband, in-laws, and four small children while pregnant with a fifth, only to be recaptured. Faced with a harrowing decision, she takes the life of one of her children rather than  allow her to return to the ills of slavery. The play will run from Aug 8-27 in the Let Live  Theatre at The Actors Company,  916 N. Formosa Ave. Los Angeles, CA  90046.

Inspired by a true story, the tale is told through Margaret’s own eyes, the eyes of her imagined west African ancestor, and Yemoja, the West African goddess of water. The elder passes along cultural rituals through the recounting of African creation myths and the story of Yemoja. As Margaret recounts the past, Yemoja and the ancestors seek to remind Margaret, myself,  and all people of African descent of our royal heritage, our courage, and our  shared bright futures.

The play began as an assignment during her conservatory training to write a solo show about a real person. The assignment soon turned personal as she began to  research the life of Margaret Garner and noted several coincidences and parallels in their lives, down to the names of Margaret and her husband having the same names as her own parents. Makena felt compelled to tell Margaret’s story in a way that elevated and humanized Margaret beyond her tragic story.  She hopes to inspire compassion, love for African culture, and hope to a new generation of those of African descent who may not feel as connected to their African heritage as she does.

ABOUT THE PRODUCTION TEAM:
Ms. Fleiss Brogger (Director) is an award-winning actress, director, and teacher who trained with both Stella Adler and Uta Hagen and is a long-standing member of the Actors Studio. She has extensive theatrical experience, including leading roles on Broadway alongside Glenda Jackson, Judd Hirsch, Laurie Metcalf, and Brian Cox and being directed by such luminaries as Stephen Daldry, Daniel Sullivan, Howard Davies, and David Mamet. She received a Joseph Jefferson nomination for her work in An Inspector Calls and LA Drama-Logue Awards for Molly Sweeney, Ghost in the Machine, and Springtime for Henry. She has also guest-starred in numerous TV shows, including “ER,” “Judging Amy,” “Without a Trace,” “The Guardian” and “Crossing Jordan.” Her feature film work includes playing a leading role in the film Kent State and a supporting lead for Franco Zefferelli in Endless Love. She has been a professional acting teacher for the last 15 years at such institutions as the American Academy of Dramatic Arts and  Stella Adler’s of Acting Studio, and most recently having founded the Workshop, a scene study/rehearsal technique class for professional actors in Los Angeles.

Makena Hammond (Writer, Producer, Actor) is a former US naval physician (M.D.) turned model/ actress/playwright, who is currently studying at Stella Adler’s Art of Acting conservatory in Los Angeles. Makena is the daughter of a Ghanaian immigrant and a southern black woman with African and Native American heritage. She is passionate about pulling from her varied backgrounds and experiences to remind us of how much more alike we are than different.