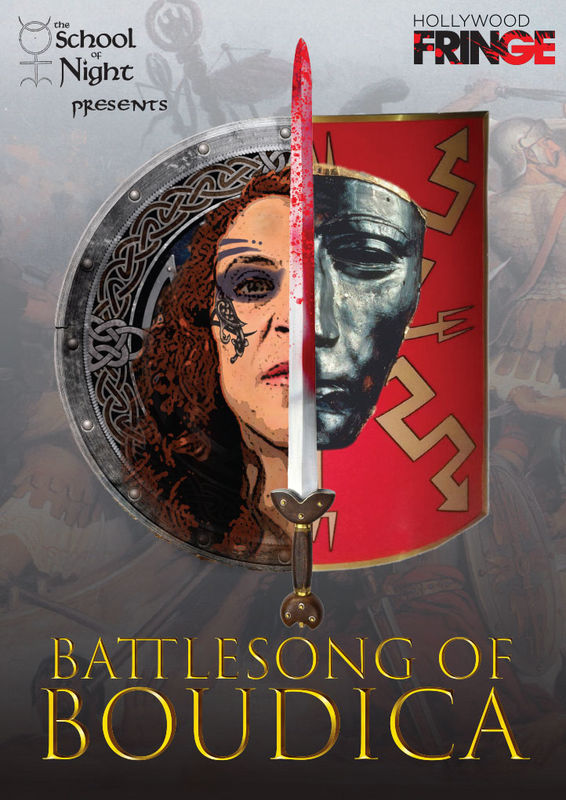 “Tell Paulinus I’ll see him on the field
Where I shall single him alone to fight
If he be man enough to cope with me.”
– Boudica

From the Producers of KLINGON TAMBURLAINE, HERCULES INSANE, THE FAGGOT KING and PUNCH AND JUDY. We bring you, BATTLESONG OF BOUDICA.

The School of Night is proud to present a Me-Too saga of the iron age, a primal spectacle of power and revenge told in song, spoken verse, dance and epic stage violence.

Taken from the history and legend of the Iceni Warrior Queen Boudica, famous for her bloody uprising against the invading Romans in 61 A.D.

The Legions of conquering Rome have swept across the mist-shrouded island of Britannia and subdued the majority of its warring, disunified tribes.

On the advice of his consort Boudica, Chief Prasutagus of the Iceni tribe has forged an alliance with the occupying Romans in hope of preserving his people’s liberty.

But when Prasutagus is conscripted by Rome and killed in battle, Roman law refuses to recognize Boudica or her young daughters as the deceased chief’s heirs. Their estate and lands are deemed the property of the Roman Emperor Nero.

For resisting the theft of her family’s ancestral home, Boudica is whipped and her daughters brutally assaulted. Savaged, dishonored and discarded for dead, Boudica seeks a bloody revenge.

Securing the chiefdom of her tribe by trial of fight, she sends word across Britannia: Rise up, unite and push the Romans out. Soon all of Celtic Britannia is in revolt, rallied beneath the banner of War Chief Boudica.

But the steeled force of Rome intends neither surrender nor retreat. And so the stage is set for an epic battle, the subject of legends and songs sung across two millennia.