From A to Za'atar 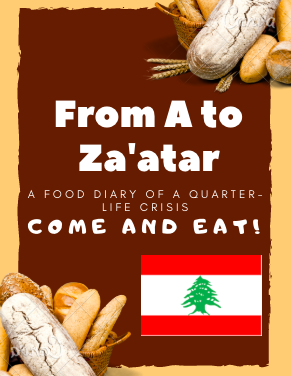 Laila is your Lebanese guide on this personal culinary journey with real food! The daughter of Lebanese and Syrian immigrants, Laila has always loved being Arab and American. However, what happens when she faces the ultimate question of her quarter-life crisis: how does location affect identity? Laila turns home for answers; that is, anything spiced with cumin served on top of a bed of rice with yogurt on the side.

Step into her kitchen while she dishes out what the Mediterranean diet is all about – family dynamics that can only result in a comedy of manners. Time to time, Laila may get pulverized by Lebanese and American expectations converging, but this show is a celebration of what it means to be in the New and Old World. With an immersive element of tasting the food Laila is talking about, let her know what her food is like when she asks. Don’t worry, she’s a real artist. She can take feedback.

If you aren’t Lebanese, don’t worry! Any Lebanese love to talk about being Lebanese so much you will feel like part of the family, alhamdulillah! After this play, you can tell all of your non-Lebanese friends a random assortment of Lebanese facts that sound like they are straight out of “My Big Fat Greek Wedding.” For all Arabs that have been waiting for someone to call out Trader Joe’s on their brownie batter “hummus”, you are seen. If you are the child of immigrant parents, you may share in Laila’s simultaneous exasperation and love of her parents.

And if you’re hungry, come and eat!

ABOUT THE TEAM:
Laila Abdo (Actress, Writer)
Laila grew up corn-and-hummus-fed in southern Illinois, exploring the national forest surrounding her hometown. Speaking Arabic while at home and packing pita-bread sandwiches to school before it was cool, Laila feels passionately about sharing her cultural experiences and flavors with the world. Since moving to Los Angeles, Laila co-founded the diversity-focused, storytelling production company Free Pizza Productions. With writing partner Ashley J. Woods, these funny girls are insatiable when it comes to sitcom and sketch. From her Shakespeare roots to studying improv at UCB to being part of the award-winning “Echoes” at the 2017 Hollywood Fringe, Laila is honored to celebrate live performance with “From A to Za’atar” at Hollywood Fringe 2020.

Melissa Ortiz (Director)
Melissa is an actor, writer, and director based in Los Angeles. While she has been primarily acting for the past fifteen years, upon moving to Los Angeles she discovered her love for writing and directing. She wrote and directed “The Rise and Fall of Dracula,” which premiered at the Hollywood Fringe Festival in 2017, and produced “Frames” in 2018 with her production team at Cadame Co. As an avid baker and a lover of all things delicious, Melissa is thrilled to join Laila on “From A to Za’atar,” as telling a story through food is, to her, the ultimate dream.