How I Became A Superhero 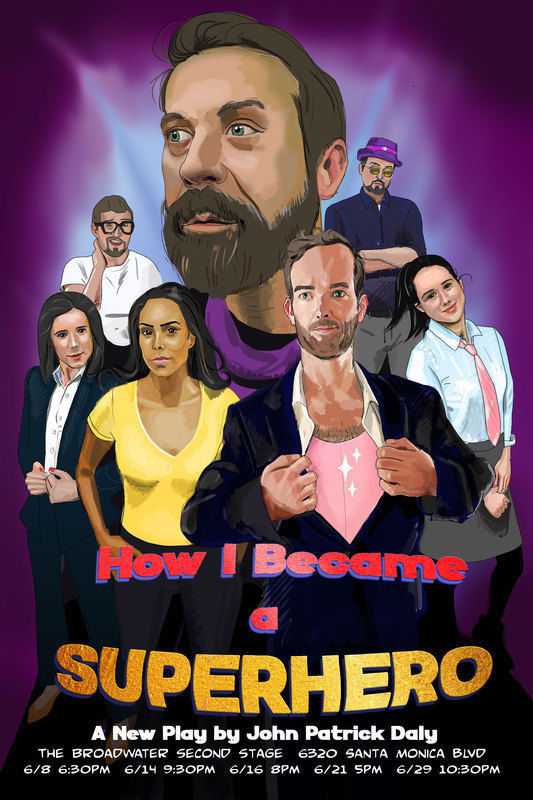 “Every cast member turned in amazing performances, making this one of the “must see” shows of HFF19, especially if you are a Marvel fan.”
Bob Leggett, Indie Voice Blog

“Go and see this show! You won’t regret it!”
Enci Box, Better Lemons

“There were lots of moments that inspired laughter, especially when the Super Hero appeared in his pink tutu for the first time. Be sure to stay for the scenes following the credits.”
Shari Barrett, Broadway World

Otto Sparks and Reggie Spencer are two online activists with dreams of changing the world. When Otto decides to take a leap out from behind the computer and into the business of vigilante justice, he and Reggie are cast on an adventure that sets them on a collision course with colorful characters and powerful figures they only thought existed in comic books. But how will they know who the bad guys are? And do the good guys ever really win?

The second Hollywood Fringe project from writer/actor John Patrick Daly, following 2018’s Encore winner New Kid on the Block, How I Became A Superhero is a tale of humor, heart, and what it really takes to be someone amazing.

“Hilarious, funny, a great twist on your every day, every man super hero!! I loved the style choices and projections. I want to see this expanded into a film!! Great writing from John Patrick!!”
-Tinks Lovelace

“A fun and zany show that takes elements of the superhero genre and pokes fun at all it’s usual tropes while delivering a satisfying and enjoyable unique story.”
Matthew Robinson

“How I Became A Superhero is a cleverly written, well executed, and highly energetic new play that is definitely worthy of your time. Translating the fun of a comic book into the stage is no easy task- but this team handles it with a whole lot of talent and creativity.”
Brandon Pfeltz

“What a smart, bold and funny show!”
Zoe Wang

“More than just a fun send up of the modern superhero, a clever take on the nature of heroism in the information age.”
Ryan Carbrey

“A fantastic and fun musing on the superhero genre – what makes a hero a hero?”
Rob Angell

“How I Became a Superhero is a fun, uplifting play that helps bring out an inner child that’s been just begging to come out and play.”
Alexandra Fiallos

“The show was RIDICULOUSLY funny and so much fun to watch!!!”
Mariana Lila