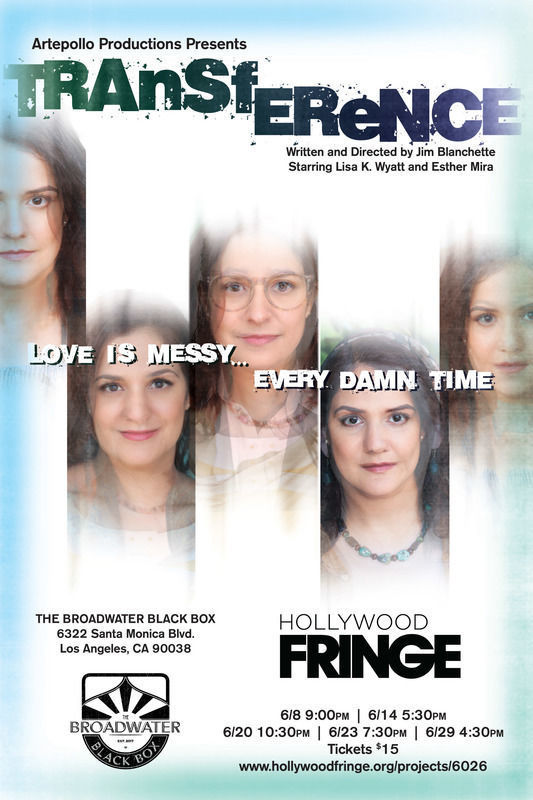 Audience Quotes
“ I just wanted to see more.”
“The script is clever and doesn’t waste any time and the cast is terrific.”
“It’s witty, lively, and funny.”
“Esther Mira was especially entertaining”
“a good thought provoking rabbit hole”
“Well written and driven by two incredibly talented actresses.”
“It left me wanting a mini-series to continue the story!”
“This show stays with me”
“Esther Mira and Lisa K. Wyatt … played off of one another with balance and believability”
“The writing was incredibly snappy and clever – and Lisa and Esther managed to handle all of it with grace, humor and solid timing”
“Writer/Director Jim Blanchette created a fascinating world for the two leads to live in”
“Lisa k Wyatt is brilliant. She is a force on stage.”

A woman awakens from hypnotherapy and remembers all of her past lives. And that her therapist has been the love of her life in every lifetime. In Jim Blanchette’s dark romantic comedy, Transference tells the story of a woman hoping to get it right at long last, or at least not get murdered this time. Expert psychology gives way to pithy metaphysical repartee gives way to death threats. It’s a love story. Featuring HFF veterans Lisa K Wyatt and Esther Mira, the cast explores the most important question in any relationship: How long can you hold a grudge?