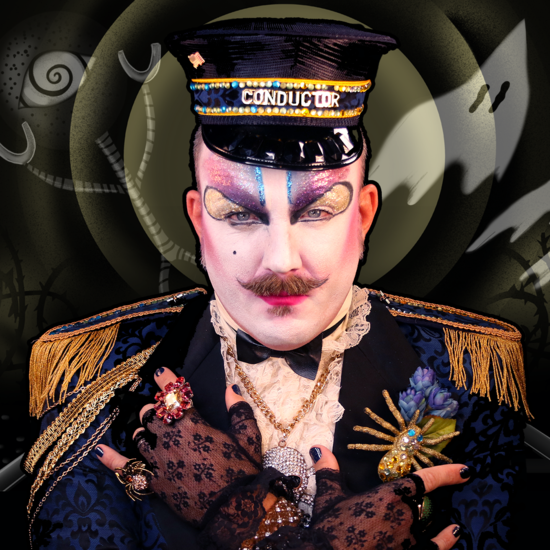 “Where were you the night the Gaybird Steamer ran off her tracks?”

Dandy Darkly’s latest storytelling saga is a Southern Gothic tall tale as told by the survivors of that tragic Halloween night – from the little boy chased by the ghosts that still haunt her as an adult to the cruel Colonel buried in his bunker, tinkering with his sinister toys. Dandy Darkly’s All Aboard! is a raucous uprooting of Deep South stigma served alongside a heaping helping of sizzling social satire and howling humor. Enjoy a dripping earful of Southern Gothic grotesquery: creepy country robots, African spider gods, beauty shop gossip and inbred family freakery — oh, and trains. All aboard for Dandy’s most beautifully batshit creation yet. Winner “Critics Choice Best Show” Orlando Fringe 2019. Winner “The Spirit of the Fringe Award” Cincinnati Fringe 2019. Winner “Best of Fringe” San Francisco Fringe 2018. Named a top show by The Stage at the 2018 Edinburgh Fringe. Critically-acclaimed. Award-winning. The less you know, the better. Simply “Go. See. Dandy!”

“Grotesque, profane, profound and laugh-out-loud funny, Dandy Darkly’s All Aboard is exactly the kind of one-of-a-kind experience Fringe was invented for.” Orlando Weekly

“Dandy Darkly’s All Aboard is Fringe theatre at its finest: an outlandish collision of styles and stories that provokes visceral reactions. Critics Pick!” Cincy CityBeat Magazine

“Of all the American performers currently integrating apologies into their work at the moment, none comes close to the creative eloquence of queer storyteller Dandy Darkly. All Aboard! is a wake-up call to mankind; a pointed, vociferous satire, taking out fame, social media and the rise of the far right around the world.” ★★★★★ The Stage

​"A spectacular storytelling performance that is completely distinctive. If you are looking for a show that will emotionally haunt you and intellectually dare you, Dandy Darkly’s All Aboard! is the ride of a lifetime." ★★★★★ Edinburgh Festivals Magazine

“There’s no one quite like Dandy Darkly at the Fringe – or any where else. His mesmerizing presence is a transporting, charismatic and psychedelic experience in which the passion for justice burns as strongly as delight in the macabre.” ★★★★ The Scotsman

“Ladies, gentlemen and every beautiful being born anyone in-between… ALL ABOARD!” Dandy Darkly