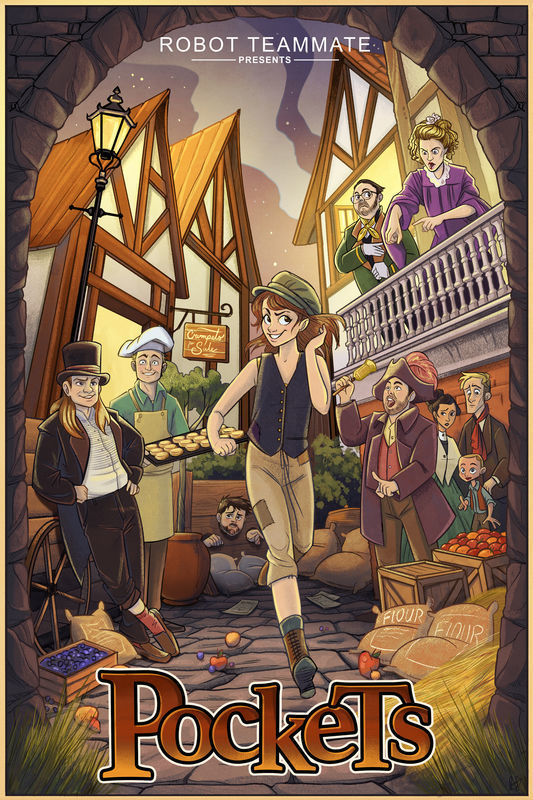 In the old British-ish kingdom of Crumpeton, a young girl turned pickpocket accidentally finds herself swept up in a criminal uprising against the Duchess, who happens to be her mother. Will she have the heart to sabotage Mum’s well-laid plans on the most important day of the year, Crumpet Day? #CheckYourPOCKETS for tickets to this fast-paced, funny, and touching period piece to find out! Another original musical comedy from Robot Teammate, creators of TIMEHEART, THUG TUNNEL & TURBULENCE!

TOP 10 MOST ANTICIPATED SHOWS FOR HFF19 – LA Music Critic: “If ever there was a ‘sure thing’ at Fringe, it would be anything put on by Robot Teammate… their creativity and musical abilities are among the best we’ve ever seen at Fringe.”

TOP 10 MOST ANTICIPATED SHOWS FOR HFF19 – MikeCheck.com: “If you have had the pleasure of seeing Robot Teammate perform, you already know they are the gold standard of musical theatre at Fringe and possible of all Los Angeles.”

“A better than Broadway experience…Robot Teammate creates musicals for the millennial generation.” – Gia on the Move

“Robot Teammate is always worth watching. Their storytelling is top-class, their musicality is hugely impressive, and, above all, they are properly funny.” – Ewan Phillips, Producer, Whose Line is it Anyway?

“Smart and exceptionally appealing…if you want to understand the kind of funny becoming more and more in demand today, or to attract a younger audience, this is a good example of what works…it’s a little absurd and kind of wrong but so completely hilarious that you’ll be hooked from the get-go.” – Musicals in LA

“Astonishing… to see their show is to see theatre explode into life before your eyes.” – Tudor House Entertainment

“Infectious music, creative story, memorable characters, hilarious one-liners… all of this combined results in the best musical – if not show! – at Fringe this year!” – LA Music Blog

“If you don’t have tickets for their current run yet, get them now or prepare to be disappointed when they sell out. Consider it a fun tax; it’s money well-spent.” – Broadway World

ROBOT TEAMMATE is a musical comedy collective based in LA. Founded in 2012, the rag tag group of improvisers initially made a splash in the LA comedy scene with a world record-setting 86-week-streak in an iO West cage match. As they honed their signature one-hour improvised musical form and developed an extensive cache of musical short-form games, they were invited to gig at UCB, Westside Comedy, LA ComicCon, Impro, and festivals across the country. In 2016, Legendary Digital Network brought the Robots worldwide, broadcasting weekly interactive musical improv shows on their Geek & Sundry Twitch.TV channel. No matter where they’re performing, ensemble members Chris Bramante, Molly Dworsky, Kat Primeau, Dave Reynolds, and musical director Branson NeJame aspire to inspire and entertain through laughter and music.

Influenced by their favorite improvisations, the collaborating machines have also scripted three awarding-winning full-length musical comedies, forming “The T Trilogy”: TIMEHEART, THUG TUNNEL, and TURBULENCE! Premiering to sold-out audiences at the Hollywood Fringe Festival, the troupe earned recognition for Outstanding Songwriting from A Little New Music in 2016 & 2017, and received the Best Musical, Best World Premiere, and Critics Choice Awards in 2017. They released the THUG TUNNEL Cast Album in early 2017 and finished off the year Off-Broadway, presenting TURBULENCE! to enthusiastic audiences at SoHo Playhouse, NYC. The Robots are delighted to be returning to the HFF community with their latest scripted musical, POCKETS!, on the main stage at The Broadwater.