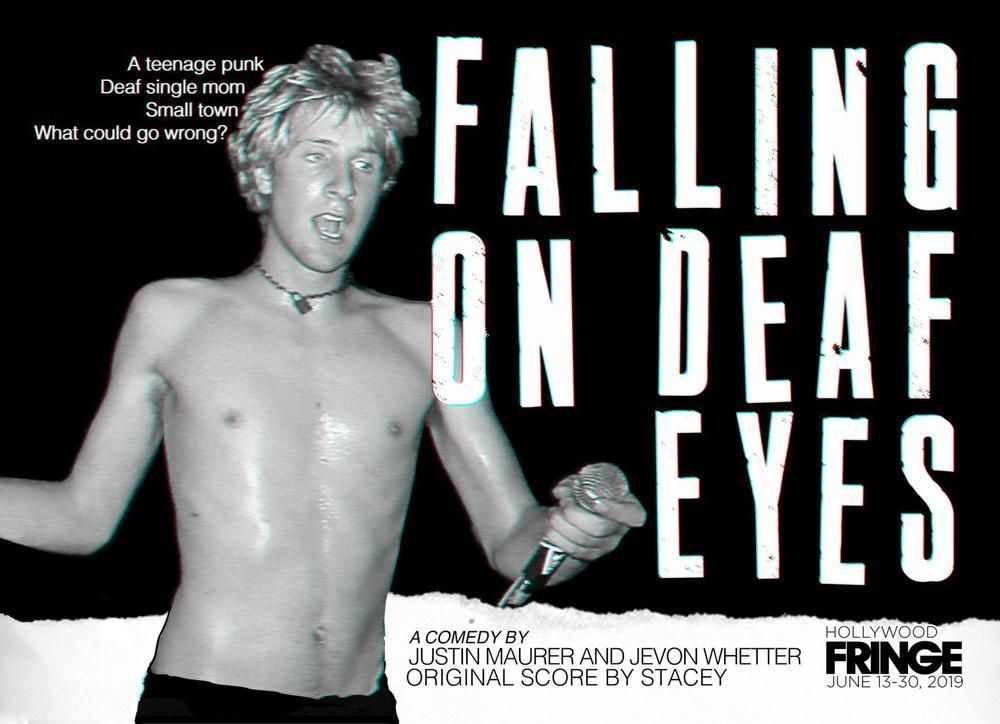 A teenage punk, a single deaf mom, a small town. What could go wrong?

“Falling On Deaf Eyes” is an autobiographical Dramedy about Justin Maurer, a rambunctious teenage punk rocker living with his single Deaf mother and hearing siblings on Bainbridge Island, Washington in the 1990’s. After a harrowing divorce from Justin’s overbearing and controlling father, his Deaf mother faces extraordinary challenges as a single parent of three rowdy hearing children in a small provincial town. Through punk rock, Justin embarks on an adolescent journey to cope with the challenges of straddling life in a hearing and Deaf world simultaneously. “Falling On Deaf Eyes” is a unique, one-of-a-kind show, an inspirational and universal portrayal of human courage and survival. (the first 2 and last 2 performances will have ASL interpreters available).

This unique production is an exciting multi-media theatrical experience incorporating music, sign language, storytelling, and theatrical visuals, with a team of sign language interpreters to ensure access to the deaf and hard of hearing. While hugely entertaining and accessible to music fans, the Fringe community, and the Deaf community, “Falling on Deaf Eyes” will also educate and inform the general public about American Sign Language and some of the daily issues facing the deaf and hard of hearing population. The show will enjoy its world premiere at Hollywood Fringe Festival 2019. All shows will be at McCadden Place Theatre – 1157 N McCadden Pl, Los Angeles, CA 90038.

Sometimes harrowing, often funny, but always compassionate in its depiction of a family in transition, “Falling on Deaf Eyes” is a unique, one-of-a-kind show and an inspirational and universal portrayal of human courage and survival.

ABOUT THE PRODUCTION TEAM

Justin Maurer (Writer/Producer/Actor) is a writer, musician, ASL Interpreter and LA native. He is a CODA (Child of a Deaf Adult), and his first language was American Sign Language. He most recently rose to local prominence ASL Interpreting for the L.A. Teacher’s Strike. He has toured the world and released records with his punk bands CLOROX GIRLS, MANIAC and SUSPECT PARTS. He has worked as a traveling dental supply salesman, Hollywood tour bus driver, and as a graveyard shift delivery boy for Crispy Pork Gang restaurant in Thai Town.

Jevon Whetter (Director/Co-Writer) is a deaf educator, producer, writer, and director who lives and works in Los Angeles. Mr. Whetter earned his MA degree in Theatre Arts from San Diego State University, earned an MFA degree from the American Film Institute Conservatory, and is currently a professor at California State University, Northridge. Jevon’s professional stage experience includes performing with the National Theater of the Deaf on its Ophelia tour and appearances in Aladdin, A Christmas Carol, and Road to Revolution at Deaf West Theatre. In 2006, Mr. Whetter made his professional debut as a director at the Deaf West Theatre, and has since worked on over fifteen films and has written and directed numerous productions for the stage.

Lisa Hermatz (Actor) a member of the American Sign Language Teachers Association, has taught college-level ASL for 19 years. She currently teaches at Pierce and Glendale Community Colleges. Lisa has also translated ASL for several projects, including Dawn Sign Press’ Once Upon a Sign video-series and Deaf West Theatre (DWT), where she also has done thespian work. She earned an L.A. Ovation Award nod for her translation work on DWT’s first-ever musical, “Oliver!” Lisa’s passion lies within translating lyrical works into the beauty of ASL and working as a consultant for those who venture into this genre of entertainment. She is honored to be working on this production with an amazing team for this summer’s Hollywood Fringe Festival.

Jann Goldsby (Voice Actor) has been an actor and an ASL interpreter for many years and is STILL learning. She is also a proud member of SAG-AFTRA, which came in handy when performing the role of “the interpreter” on THISCLOSE ‘s 2nd season with the lovely Shoshannah Stern. She can also be seen in the delightful film, You & Me written by Hilary and Alexander Baack.

Delbert Whetter (Producer) JD, MBA, served as the lead Business Affairs executive for numerous entertainment and digital content providers for nearly two decades. Delbert has worked on Exodus Film Group animated features, “IGOR”, “The Hero of Color City”, and “Bunyan & Babe”, receiving Co-Executive Producer credit on Exodus’ two recent films. Delbert serves on the Board of Directors of RespectAbility, a national non-profit organization that works with Hollywood to promote positive, accurate, diverse and inclusive media portrayals of persons with disabilities on TV and in film. He has also been appointed by the City of Santa Monica to serve a four-year term as Commissioner on its Disabilities Commission.

STACEY (Original score) this Toronto singer-songwriter is a romantic for the apocalypse generation. Her sophomore EP First Move allows a rare glimpse into the dark, solitary lucid daydreams of a Lynchian heroine. STACEY’s works have received glowing press, while her soul-stirring, captivating live presence has led her to share stages with the likes of Charlotte Day Wilson and Cameron Avery (of Tame Impala). Her songs have been featured on over fifteen television shows including Lucifer, Orphan Black, and Degrassi. Since fall 2017, STACEY’s First Move EP has amassed over 750K streams on Spotify. Surrounding the buzz of her sold out Toronto release show, STACEY played multiple Canadian national TV shows, international showcases in New York and LA, and two back-to-back sold out sets at Toronto’s Royal Ontario Museum for the Christian Dior: 70th Anniversary Exhibit.

Vanessa Gonzalez (costume designer) Since 2010, Vanessa Gonzalez has been designing and constructing costumes for film, commercials, and music videos for clients including Funny or Die, The Syfy Network, and Sawhorse.

Tim Maurer (Video Designer) Cousin. Recovering Rude Boy. Image Magician. Undeniably “Maurer.” Banged Grandpa’s drums and broke antique guitar strings with Justin, the toe-headed shadow who remains his partner in crime to this day. He dabbled in video-music-sketchcomedy and finds joy in connecting the beat and finding the visual rhythm.

Andrew Leyva (ASL Interpreter) Andrew S. Leyva is a nationally certified interpreter with 20 years of experience in the performance arts. He has worked rehearsals and talkbacks on Deaf West Theatre’s Children of a Lesser God, Pinocchio, and Spring Awakening, and Fountain Theatre’s Arrival and Departure. His theatrical interpreting training includes the Juilliard School / Theatre Development Fund Interpreting for Theatre being chosen to interpret Thoroughly Modern Millie with the instructors at the Marquis Theatre, NYC. Most recently he has interpreted A Streetcar Named Desire, Signin’ in the Rain, Legally Blonde, Newsies, Shakespeare’s Midsummer Night’s Dream, and has consulted theatrical interpreters on When At Last We Arrive, Night Light, and Little Shop of Horrors. Presently employed as an interpreter and mentor at the National Center On Deafness and the Deaf Studies Dept at CSU, Northridge where in collaboration with the Theatre Dept he passes on what he has learned to interpreting students and working interpreters. He also has taught a Performing Arts Interpreting class at College of Southern Nevada.