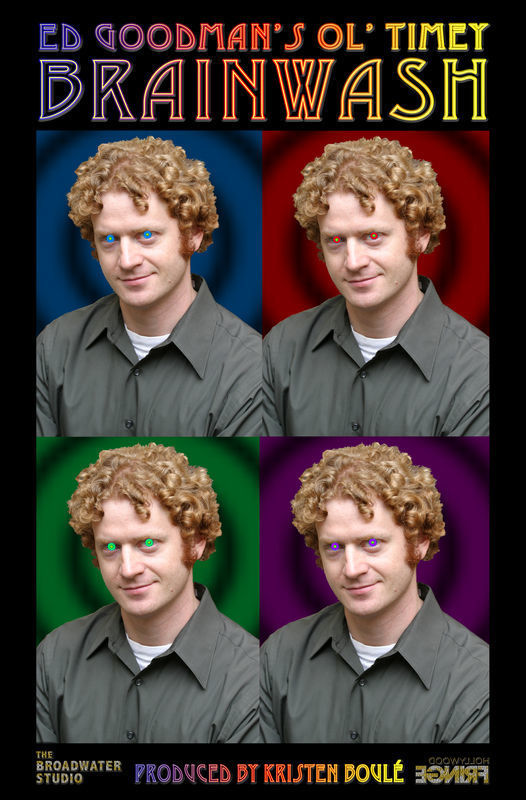 Fringe is over but the Brainwash marches on. #1 – 7 were super crazy fun. Thanks to all who helped us gain enough momentum to catch a little air. But comedy product must improve and so the Wash is up on the rack out back with its guts all over the yard. Once we get it back together, we’ll take it back out and see if we can’t do the speed limit and stay on the road without some vital piece falling off.

Watch this space for updates until we get regulated or put together some big splashy digital something else.

Meanwhile, watch the sky, beware the prophets, and fear the orb. The orb has an agenda.

All fear the orb!

Edward C. Goodman has traveled the country performing, teaching, improvising, taking pictures, and scribbling ideas on the backs of gag orders and NDAs. His thoughts are unique and fresh as he has a disorder of some kind and literally can’t think straight.

This is not that one man show.

A Second City veteran (Chicago, Vegas, Nam*), the last of the original ImprovOlympic old guard (he killed Del Close** for the title), Goodman also took the Hollywood Fringe ‘15 Best in Comedy Award home with him (and did NOT give it back***). He told BACKSTAGE “Losing pushes you to do better, to strive, to get back in and pursue that vision. Winning destroys your will to live.” Voted UCB’s “Sexy Best” in 2016, this double UCLA Screenwriting MFA showcase winner and lover of all things sugar knows his one man show will be scrutinized and discussed for generations to come so he wants to get it right.

This is not that one man show either.

So what is Edward C. Goodman, author, doctor, Reverend**** and dark tech icon bringing to the Fringe stage this summer? What’s the one man show that the producers of the Hollywood Fringe are demanding from Edward C. Goodman? When they asked for a sample, what did he tell them he would do just to get them off his back and stop the incessant phone calls?

*If you weren’t there, you can’t know.
*2 – Ed was in Del’s last class. No charges were ever brought as no evidence was ever presented. Also, there was no “title.”
*3 – ’Cause it got broken. Seriously. Snapped right in two.
*4 – Ed is none of these. Probably shouldn’t go around telling people he is.

UPDATE! 6/30: SHOW #7: The Seventh Show – #7 had a surprise twist for everybody! We decided to mix it up and switch up the lighting booth talent. Director / Street Brawler Jeremy Aldridge jumped in on the light board and really created some excitement on the grid. Pro stats and old school feel.

UPDATE! 6/29: SHOW #7 happens today and it really is up to you. The ride’s much more fun with a full boat. So get it together, procure yourself a cool beverage, and get in there! Because nothing hits quite as hard as the late-night weirdo funk show in broad daylight.

UPDATE! 6/27: SHOW #5: Sand in the Engine – #5 was devoid of air conditioning and, apparently, jokes. I may have had a fever. What I did not have is the centerpiece prop for “A Taste of Jacksonville.” The Brainwash hurts when the brain is on fire…

JUNE 18th Email to the cast of THE ROOTBEER.
SUBJECT: Fat Rootbeer Discounts for the One Man Catastrophe

Hey Rootbeerians,
If you’re headed to the bathroom in the Broadwater, and there’s a line, and you have a few minutes to kill, I’m doing a show right next door to the men’s.

The proximity is lost on no one.

Anyway, the magic theater code is “presence” and that makes everything pay what you can. The show, the bathroom, all bar drinks, everything. Gas, rent, I just solved all your problems with the PWYC code. The magic of theater is real. And I mean real real, not 2019 real. Vintage real. Old school real. (Man, it was so real in the old school. So real.)

Or, you could take your pwyc and the 55 minutes and just stand in the bathroom line. The sound quality is about the same, the content is probably gonna be comparable, and who knows, maybe one of these people just needs to wash their hands or blow their nose and will be in and out and you’ll slide in early.

UPDATE! 6/15: SHOW #2 was – and we entitled this one “Opening.” The overall feel in the street afterward: People were delighted that that preview was an honest to god pants-falling-down preview…and maybe the Opening Night crowd was a little disappointed that it was an honest to go, pants-falling-down preview again. But I ain’t your monkey! I’m not here to please you! I’m here to do the Wash. The Brainwash. (It’s ol’ timey.)

UPDATE! 6/7: SHOW #1 was called “Preview” and a few folks wandered in to preview it. Conclusion: there’s another show on the 15th.