With My Eyes Shut 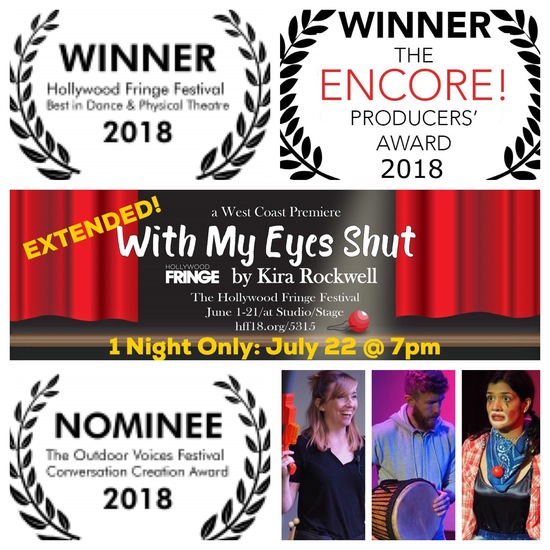 WITH MY EYES SHUT – A WEST COAST PREMIERE
by Kira Rockwell, produced as part of the Hollywood Fringe Festival 2018

“definitely one of the best productions of HFF18” – Bob Leggett, See It or Skip It/ Indie Voice Blog

“Directed by Tara Donovan with skill, passion and great insight into the many components of those on the autism spectrum” – Shari Barrett, Broadway World
…

With My Eyes Shut is a love story that explores how we make connections, when typical forms of connection aren’t available. Two neuro-divergent young people meet in what appears to be clown college. Learning emotions through facial expressions and working towards the goal — interaction. Cole and Naomi both have Asperger’s Syndrome and relate to the world through their own expertise. Cole a musical savant and Naomi a dance prodigy who feels in color, grow closer as the perils of “performing” and the interjections of the Stage Hand weigh on them.

Through instruments, Simon says, nerf guns, and dance, Cole and Naomi discover their truth and a connection they never thought possible.

Naomi is played by Fringe and LA stage veteran, Esther Mira. Her recent credits include Clutch Production’s empowHER Series, Revolution in a Catsuit, Fifty Shades of Shrew, and Jimmy Kimmel Live. Craig Shields, makes his first return to the Hollywood Fringe since 2010, as Cole. A professional musician, Craig can be seen performing with his band Cuaño or accompanying dance at Cal State Fullerton. Olivia Schlueter-Corey rounds out the cast as Laura Hue, our over-worked Stage Hand. Olivia’s LA Credits includeThe Nina Variations, A Midsummer Night’s Dream, Othello, and Macbeth (Shakespeare By The Sea), and The Winter’s Tale (Porters of Hellsgate).

Kira Rockwell is a playwright from Texas, currently based in Boston. Kira’s plays have been developed and or produced with Fresh Ink Theater, Boston Playwrights’ Theatre, Goat Song Theatre Collective, and Little Black Dress INK. Her work has been featured in the One Minute Play Festival-Boston (2017), the Out of the Loop Fringe Festival (2015, 2016), and Alaska’s Last Frontier Theatre Conference (2016). Kira is a proud member of The Dramatist Guild. BFA in Theatre Performance: Baylor University. MFA in Playwriting candidate: Boston University. Find out more at www.kirarockwell.com

With My Eyes Shut marks Tara Donovan’s Hollywood Fringe directorial debut. She produced and performed in the Hollywood Fringe with Broads’ Word Ensemble since 2014 and serves as the Producing Managing Director at Little Fish Theatre.