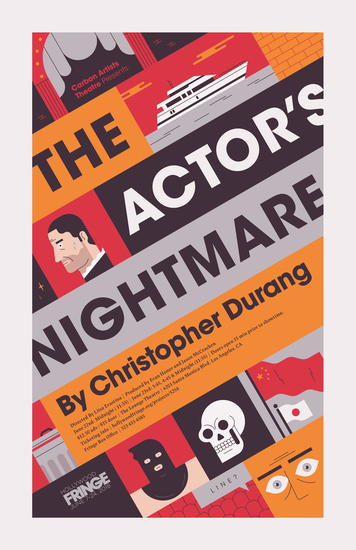 This play was inspired by the well known dream that many people in professional and amateur theatre have, that they go must perform in a play that they have inexplicably never been to rehearsals for, and for which they know neither the lines or the plot.
So in this play George is an accountant who wanders onto an empty stage, not certain where he is or how he got there. The stage manager informs him he’s the understudy, and must go on in a few
minutes. George doesn’t know his name, doesn’t think he’s an actor (“I think I’m an accountant”), and has no idea what play he’s supposed to do.
He’s pushed onstage dressed as Hamlet, and finds himself opposite a glamorous actress who seemingly is in Noel Coward’s Private Lives. George does his best to guess the lines, and guess appropriate behavior, but then the actress leaves, and suddenly a new actor comes in, spouting
Shakespearean verse (from Hamlet). This is much harder to guess, and after a while George is left alone and must improvise his own Shakespearean soliloquy. In the closing sections, George finds himself thrust into a Samuel Beckett play (a combination of Waiting for Godot and Endgame), which he has very little knowledge of. And then suddenly he’s Sir Thomas More in the historical drama. A Man for All Seasons, facing a beheading for opposing Henry VIII’s marriage to Anne Boylen – and alarmingly the executioner seems more real than he
should.