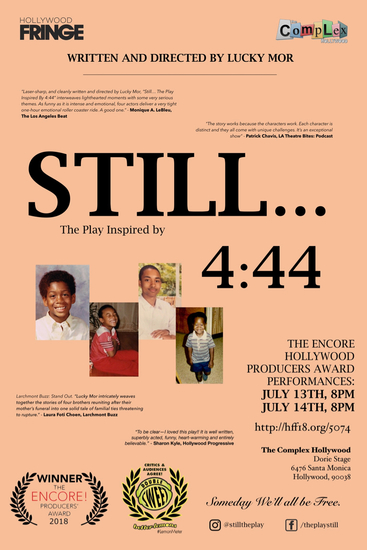 Christoper Steves, celebrity news opinion host, returns to his hometown of Detroit for his departed mothers funeral and meets with his 3 brothers to handle the estate. Christoper has had tremendous success in news television with his sometimes controversial show.

LaVon Steves, his blue-collar brother is a husband with 4 children and 2 foster children. He has been working for Ford right out of high school. He has struggled living paycheck to paycheck and now has harbored resentment for Christoper.

Manchester Steves, the brothers’ peacekeeper, had a promising professional football career in Atlanta, GA. He grew uncomfortable not living his true self and came out in an exclusive interview on his brother Chris’ show. After that he became a free agent and was never picked up by another team. After that he got into real estate flipping houses back in Detroit.

Nolan is the youngest brother ten years behind Manchester. Radical college millennial. He organizes and goes after every injustice he finds. Active BLM activist has been a part of many demonstrations, boycotts, and protests that resulted in arrests. He has also boycotted Chris’s show saying he was a sellout and Uncle Tom while Chris has been paying for his college tuition.

Each brother has their own plans for their parents’ estate as well as their own secret they have been hiding. The lifelong misunderstandings, resentments, and secrets come to surface jeopardizing the fragile family’s survival in the living room of their parents’ home.