Are We Not Human? 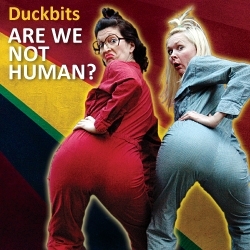 Using slapstick, dance and pure tomfoolery, Duckbits takes the audience on a journey through the stranger side of the human species. Duckbits is not afraid to get ugly and dirty in a town that asks women to be perfect.

Imagine you grew up never hearing the word “no”. Who would you be then?

“GO! Both women are skilled vaudevillian clowns. They strive for simple, unabashed silliness and hit their mark with ease.” -LA WEEKLY

“Ilana and Keirin are two of the messiest clowns in town. Go frolic with them!” -David Bridel, Studio Six Clown School

Performing at the Lounge Theatre:

Duckbits (Homo duckbitus) have an oddly-developed brain, capable of high levels of nonsense and inappropriate folly. This mental capability, combined with an erect body carriage that frees the hands for manipulating objects, has allowed Duckbits to make far greater physical blunders than any other living species on Earth. Other low-level thought processes of Duckbits, such as oblivion, irrationality, and incompetence, are considered to be defining features of what constitutes a “Duckbit”.

Duckbits are noted for their desire to understand and influence their environment, seeking to explain and manipulate phenomena through their use of flapdoodle, inanity, and senselessness. This natural curiosity has led to the development of chaos, mayhem, and salmagundi. Duckbits are the only species known to build duckpodge, dukcus, and duckbub. The study of Duckbits is the scientific discipline of absurdology.

“If the Clown appears, of course we will laugh, and we will cry and we will recall the joyful simplicity of life without fear.” -Jef Johnson