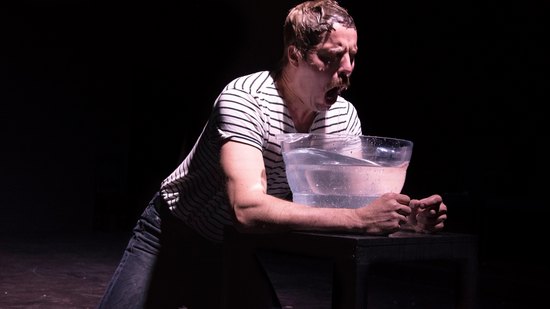 RECIPIENT OF “BEST OF THE BROADWATER”!!!
NOMINEE FOR “BEST ENSEMBLE THEATRE”!!!

Before Chris Burden became known to millions with his “Urban Lights” and “Metropolis II” exhibits at LACMA, he spent his early years as the most controversial and subversive performance artist in the United States, putting himself and others in uncomfortable and sometimes dangerous situations for his art. “A Beast/A Burden” covers five incredible and influential months in the life of the young artist (October 1971-February 1972) as he forms the basis for his ever-present mythic stature in the art world. With Burden himself as the meandering and sometimes unreliable narrator, the show evaluates the nature and purpose of art, the place of ‘self’ in an artist’s work, and the way creatives evolve over time into who they’re meant to become.

“The actor who portrayed Chris is strikingly similar in physicality, but also managed to turn that ‘character’ into his own, not a simple task given the subject…I laughed, I was moved, and it made me fondly remember my friend.” – FRINGE REVIEWER

A historical dramatization loosely based on the biography collection “Chris Burden” by Fred Hoffman, John Berger, and Kristine Stiles, and the documentary “Burden” by Richard Dewey and Timothy Marrinan.