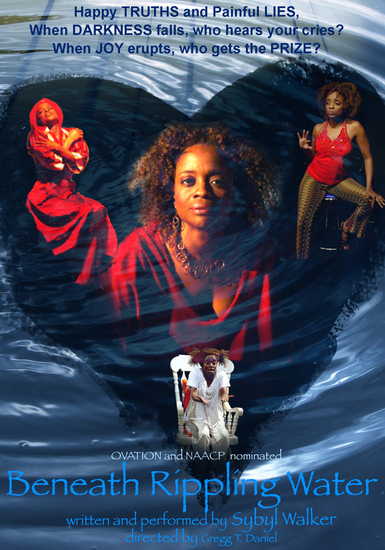 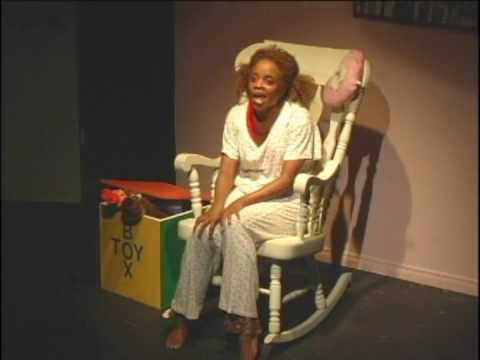 “A virtual rollercoaster ride with all the uneasy queasy feelings, yet with total exhilaration”! BENEATH RIPPLING WATER is a critically acclaimed three-act solo play performed in 75 minutes and has been nominated for an OVATION AWARD for BEST SOLO PERFORMANCE and for NAACP AWARDS for BEST ACTRESS & BEST PLAYWRIGHT.

In this compelling, hilarious, disturbing trilogy about navigating the maze of secrets, life and love, Walker narrates and performs 15 characters; male and female, young and old, wise and simple utilizing drama, comedy, song, dance, poetry and spoken word. Beneath Rippling Water is a completely unrestricted immersion into three tantalizing tales; journeys in, through and out of love; 4 intriguing women and those who inhabit their worlds; a secret peek into the hidden mysteries that lurk beneath the surface of their lives…the “stuff” churning beneath the façade:

“Astounding doesn´t adequately describe Walker´s dynamic performance. What talent! What versatility! A play you will ache to see again and again”. American Chronicle

“Touching, deep, filled with yearning, often visceral, and in the end underscored by an elemental joy”. Pasadena Star News

“Virtuoso performance …I found myself immersed in laughter, tears and deep reflection.”

“It is entertaining, engaging and thought provoking. Not to be missed".

Sybyl Walker is a multi- award winning actor who has performed on Broadway, Off-Broadway, in prestigious regional theatres around the country, in the Los Angeles area and in Canada. In addition to her extensive theatre background, she has also performed in numerous television shows as well as on several film projects. She is also a singer, writer, poet, spoken word artist and vegan raw food chef.

Gregg T. Daniel has directed productions of “BRW” for the Company of Angels and at Fremont Centre Theatre in Pasadena. He is a graduate of NYU’s Tisch School of the Arts and UCLA extension; Directors’ program in Film, Television & New Media. Gregg is a member of New York’s Lincoln Center Directors Lab and the Actors Studio Playwrights/Directors Lab. Gregg is the Artistic Director of the L.A. based, LOWER DEPTH THEATRE ENSEMBLE