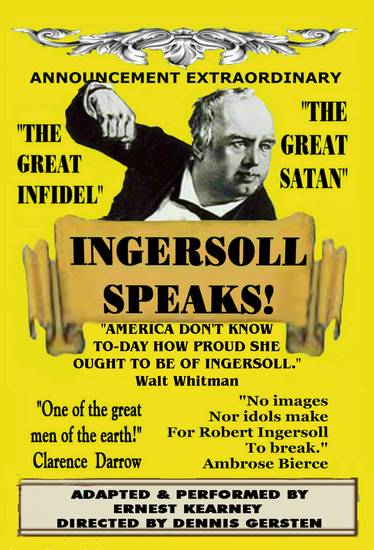 “INGERSOLL SPEAKS!”
THE GREATEST AMERICAN YOU’VE NEVER HEARD OF.
Robert Ingersoll (1833-1899) Civil War veteran, Republican powerbroker and the most influential intellectual in American history; a tireless activist, Ingersoll supported equal rights for minorities, the right of women to vote and opposed capital punishment.
He was seen and heard by more Americans than any man in our history before the advent of film and radio
An advocate for science and the separation of church and state,
he was the most outspoken foe of religion this country has ever known, and the father of America’s Golden Age of Freethought .

“The future historian will rank Robert G. Ingersoll peerless among the great…” Elizabeth Cady Stanton
“The name Robert Ingersoll is in the pantheon of the world.” Eugene Debs
“I have only but known two truly great men. Abraham Lincoln and Robert Ingersoll.” Frederick Douglass.