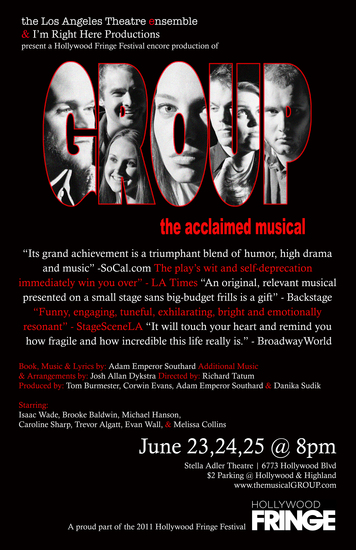 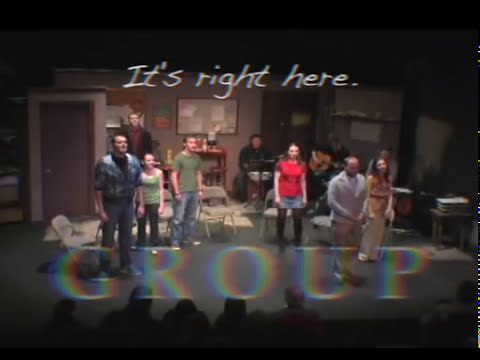 We are proud to present three encore performances of The Los Angeles Theatre Ensembles production of the new musical “Group".

“Group” is an original musical that premiered this past January at the historic Powerhouse Theatre in Santa Monica. In short, “Group” is:
1 professor, 6 twenty-somethings, 3 musicians… Musical Group Therapy. Group chronicles seven strangers’ path to love and acceptance. With heartfelt wit, set to an indie-rock score, you’re going to find your peace here.

Here are what critics had to say about our first run:

“Group: A Musical” at The Powerhouse Theatre in Santa Monica, is the type of experience every small-theater production strives to be. It’s an experiment about an experiment and it succeeds on every level. Its grand achievement is a triumphant blend of humor, high drama, and music."
-Laurel Belgreen – SoCal.com

“WOW!¨GROUP: A MUSICAL¨Musical group therapy is one terrific idea for a show, and Adam Emperor Southard’s very first musical makes for one terrific evening of theater, one which starts out promising, keeps getting better, and by the end of its second act, has earned every decibel of the audience cheers which erupt at curtain calls. Group: A Musical is funny, engaging, tuneful, exhilarating, bright, and emotionally resonant. If there is justice in the highly competitive world of musical theater, it should put rookie creator Southard’s name on the musical theater map.”
- Steven Stanley – StageSceneLA

“Group is a thought provoking exploration of the passion, pain, defiance and loss that occurs in the process of growing up. It will touch your heart and remind you how fragile and how incredible this life really is” – BroadwayWorld

“Southard…is on to something genuine here, and the play’s wit and self-deprecation immediately win you over.”
-Charlotte Stoudt – Los Angeles Times