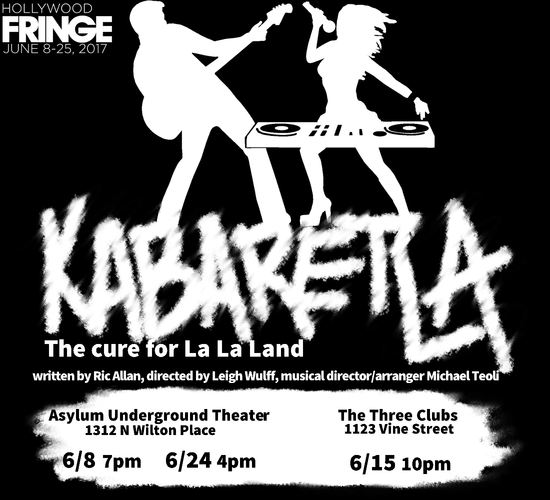 A young multi-talented woman arrives in L.A. to make it as a singing D.J.

She auditions for an “old school” rock singing owner of the popular Hollywood club “Kaberet L.A.” who gives her a spot to perform despite their cultural and musical differences (Disk Jockeys are not musicians!).

These differences escalate when she is pursued by the influential but notoriously unprincipled Hollywood politician and owner of a multitude of night clubs who orders the place raided and everyone but the “ladies of the Kabaret” he so eagerly desires getting tossed in jail.

After riots and rescues ensue, our DJ and Owner are reunited in a way that helps them see more eye-to-eye, thus saving the venue and foiling the politician’s take-over plans for most of the clubs in the city..

This “pop opera” is performed with double entendre humor and includes song and dance numbers by a Greek-type Chorus of “Angels.”