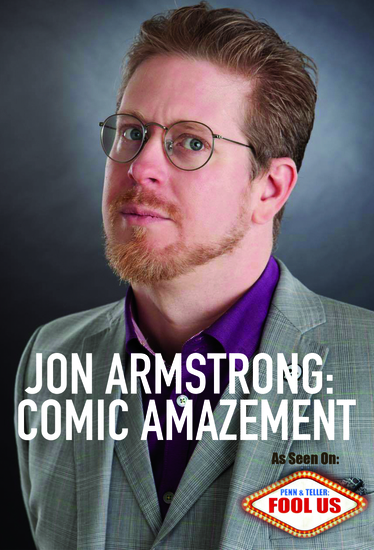 “Totally charming and highly baffling at times, what Jon Armstrong does is make you believe some things in this world are truly magical.” – My Haunt Life

“Jon is quite a talented magician, with a solid mix of comedic humor. He was engaging and enthusiastic, which made for an entertaining and fun hour.” – Michele Brittany, Fanbase Press

Winner of numerous awards, including Close-Up Magician of the Year, Jon Armstrong is best known for his world-class magical talent and for being funny. Not just magician funny—actually funny.

Jon honed both skills beginning at age 20, when he became the resident magician at Disney World, and then a recurring headliner at Caesar’s Magical Empire. Soon after, Jon started touring all over the world, performing in over 30 countries to date.

You also have seen him amaze Kathy Lee on “The Today Show,” cause Penn on CW’s “Penn and Teller’s Fool Us” to exclaim his act as “the most original I’ve ever seen!” and have Jay Leno profess his love to him on “The Tonight Show.”

When you see him live, Jon hopes that you laugh loudly, are amazed by his skills, and, most of all, feel like you made a new friend.

This is not just another magic show! Jon Armstrong has traveled around the world with just his wit and a pack of cards. Having grown up in Orlando, Florida, he now lives in Los Angeles where he is a frequent performer and award winner at the world-famous Magic Castle. Come to this rare public performance and experience the type of magic and humor that has amazed and entertained audiences the world over!

Winner of the 2011 Fringe Award for Best Cabaret or Variety Show!