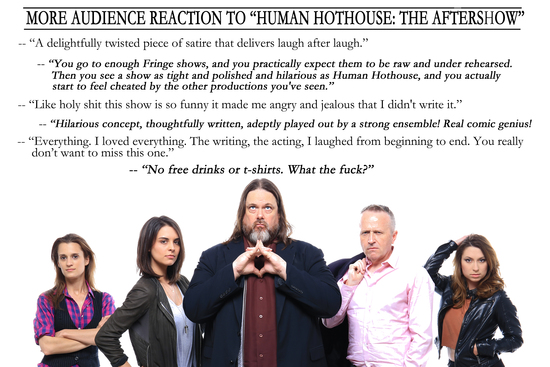 “Vain, Vapid, Vulgar…and the 2nd most popular TV show in the country.”

The hugest, most binge-worthy TV hit in the entire nation is “Human Hothouse,” the gripping drama that follows the last 7 humans on earth as they try to recreate civilization inside the government sponsored bio-dome that spared them from a universally fatal global pandemic. The second most watched TV show in the nation is “Human Hothouse: The Aftershow,” an hour long recap that immediately follows. Each week, 27 million viewers tune in to watch host Tia Von Bachman chat and Tweet it up with the show’s stars, creators and celebrity superfans. Gasp as the wheels come off in the alcohol-fueled season finale, where whispered secrets and searing behind the scenes conflicts spill out into an epic night of trainwreck TV. “Human Hothouse: The Aftershow” is spirited take-down of artistic navel gazing fed by jealousy, ego, social media and tequila.From Jim Hanna, the creator of 2015 Hollywood Fringe hit “The 7th Annual One-Man Show World Championships,” a 10 time nominee and three time winner at the 2015 Fringe Awards.

“Hilarious from the grandiose melodramatic lights up…When I say, hilarious beyond all measure, this show needs an extension after Fringe.” — Gia On The Move

“The entire cast is spot-on, running with archetypes of solo performers and just nailing their bits…All I know is that I haven’t laughed that hard and long in a while, and I certainly haven’t cried from laughing at a Fringe show in ages." Turnstylenews.com

“… a scathing but deliciously comical send-up of the one-person show genre—embedded with a plethora of achingly familiar clichés, also inventing a slew of new ones.”—Bitter Lemons