Come Fux With Us 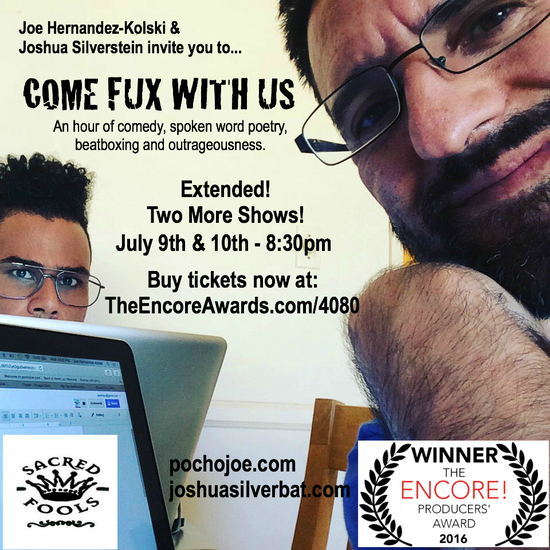 “So smart, so fun and so deeply original!”

“The theme of male identity uncertainty came through clearly, as did the desire of each for love, albeit in completely different ways.”

Joe Hernandez-Kolski & Joshua Silverstein met while performing in the spoken word poetry scene several years ago. They collaborated on a poem and have been working together ever since. Their unique blend of comedy, spoken word poetry, rap and revealing storytelling attracts fans from all backgrounds. Not only is Joshua Silverstein an accomplished actor but he’s also a professional beatboxer who has performed all over the world, most recently with Wayne Brady in Las Vegas and on the Late Late Show with James Corden, Reggie Watts and guest Anne Hathaway. Joe Hernandez-Kolski is an Emmy award-winner and two-time HBO Def Poet who can be seen in the upcoming Netflix reboot of “Gilmore Girls.”

Or check out the link below for their MiTu web series and other videos!